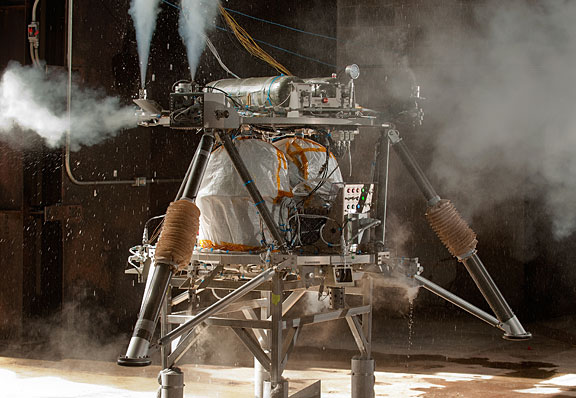 Huntsville, Ala. – Today, engineers at NASA’s Marshall Space Flight Center in Huntsville, Ala., began the first phase of integrated system tests on a new robotic lander prototype at Redstone Test Center’s propulsion test facility on the U.S. Army Redstone Arsenal, also in Huntsville. These tests will aid in the design and development of a new generation of small, smart, versatile robotic landers capable of performing science and exploration research on the surface of the moon or other airless bodies, including near-Earth asteroids.

This initial test phase, or strapdown testing, allows the engineering team to fully check out the integrated lander prototype before moving to more complex free flight tests. The team secures, or straps down, the prototype during hot fire tests to validate the propulsion system’s response to the flight guidance, navigation and control algorithms and flight software prior to autonomous free flight testing.

“Our team has been on a record paced design and development schedule to deliver the robotic lander prototype to the test site,” said Julie Bassler, Robotic Lunar Lander Development Project Manager. “We have succeeded in designing, building and testing this new lander prototype in a short 17 months with an in-house NASA Marshall team in collaboration with the our partners” — Johns Hopkins Applied Physics Laboratory of Laurel, Md., and the Von Braun Center for Science and Innovation in Huntsville.

The flight test program includes three phases of testing culminating in free flight testing for periods up to sixty seconds scheduled for summer 2011. The prototype provides a platform to develop and test algorithms, sensors, avionics, software, landing legs, and integrated system elements to support autonomous landings on airless bodies, where aero-braking and parachutes are not options. The test program furthers NASA’s capability to conduct science and exploration activities on airless bodies in the solar system.

Development and integration of the lander prototype is a cooperative endeavor led by the Robotic Lunar Lander Development Project at the Marshall Center, Johns Hopkins Applied Physics Laboratory and the Von Braun Center for Science and Innovation, which includes the Science Applications International Corporation, Dynetics Corp., Teledyne Brown Engineering Inc., and Millennium Engineering and Integration Company, all of Huntsville.

The project is partnered with the U.S. Army’s Test and Evaluation Command’s test center located at Redstone Arsenal. Redstone Test Center is one of six centers under the U.S. Army Test and Evaluation Command and has been a leading test facility for defense systems since the 1950’s. Utilizing an historic test site at the Arsenal, the project is leveraging the Redstone Test Center’s advanced capability for propulsion testing.

For more photos of the hardware visit: www.nasa.gov/roboticlander