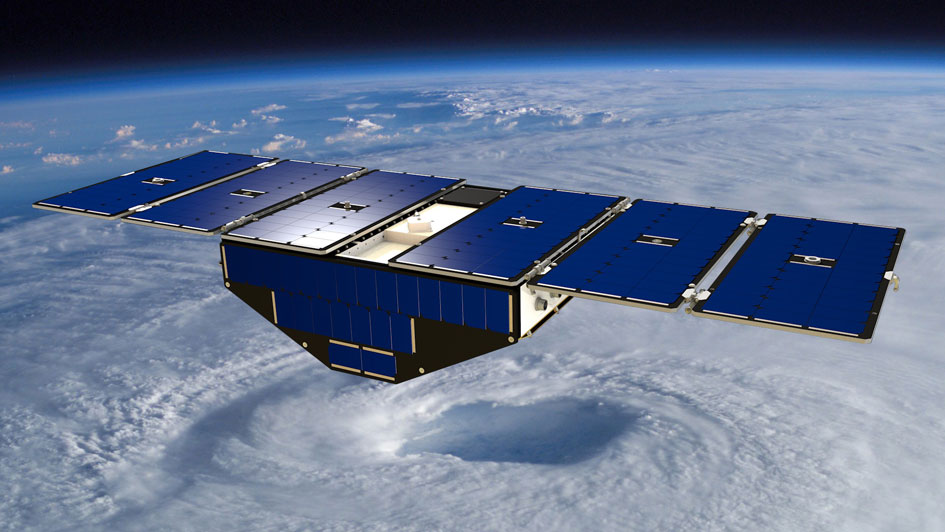 Artist’s concept of one of the eight Cyclone Global Navigation Satellite System satellites deployed in space above a hurricane. Credit: NASA.

NASA is inviting journalists to learn about a mission that will help improve hurricane track, intensity and storm surge forecasts during a media event from 8 a.m. to 1:15 p.m. CDT Thursday, Aug. 11, at the Southwest Research Institute (SwRI) in San Antonio.

The Cyclone Global Navigation Satellite System (CYGNSS) hurricane mission, scheduled to launch Nov. 21 from Cape Canaveral Air Force Station in Florida, is a constellation of eight microsatellites that will gather never-before-seen details on the formation and intensity of tropical cyclones and hurricanes.

During the event, media will get to tour two SwRI facilities, view the microsatellites stacked on the deployment module in a testing facility, and learn about the mission from the science, engineering, launch and operation teams. Photo and interview opportunities will be available, including interviews with a Spanish-speaking team member.

The event also will highlight other NASA programs on which SwRI works, including the Juno mission to Jupiter, New Horizons mission to Pluto and the Kuiper Belt, and Magnetospheric Multiscale mission, which orbits through near-Earth space observing a little-understood process called magnetic reconnection.

To register for the event, media should contact Maria Stothoff at 210-522-3305 or maria.stothoff@swri.org by Aug. 10. Access to SwRI facilities is restricted to U.S. citizens.

SwRI leads the development and integration of the CYGNSS microsatellites. The Space Physics Research Laboratory at the University of Michigan College of Engineering in Ann Arbor leads the overall mission execution, and its Climate and Space Sciences and Engineering department leads the science investigation. The Earth Science Division of NASA’s Science Mission Directorate oversees the mission.