NASA Hubble Space Telescope Image: The Lure of the Rings

Resembling a diamond-encrusted bracelet, a ring of brilliant blue
star clusters wraps around the yellowish nucleus of what was once
a normal spiral galaxy in this new image from NASA’s Hubble Space
Telescope (HST). This image is being released to commemorate the
14th anniversary of Hubble’s launch on April 24, 1990 and its
deployment from the space shuttle Discovery on April 25, 1990.

The sparkling blue ring is 150,000 light-years in diameter,
making it larger than our entire home galaxy, the Milky Way. The
galaxy, cataloged as AM 0644-741, is a member of the class of so-
called “ring galaxies.” It lies 300 million light-years away in
the direction of the southern constellation Dorado. 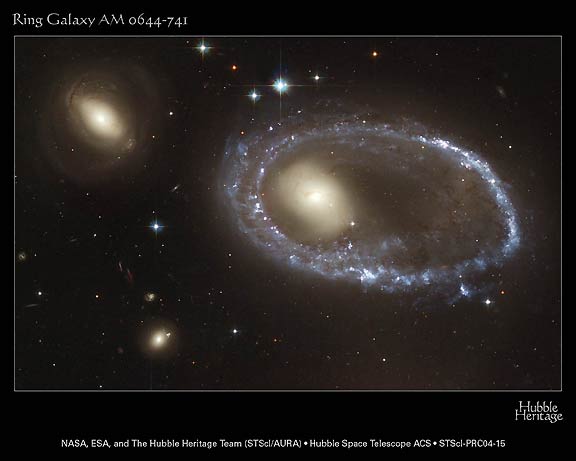 Ring galaxies are an especially striking example of how
collisions between galaxies can dramatically change their
structure, while also triggering the formation of new stars. They
arise from a particular type of collision, in which one galaxy
(the “intruder”) plunges directly through the disk of another one
(the “target”). In the case of AM 0644-741, the galaxy that
pierced through the ring galaxy is out of the image but visible in
larger-field images. The soft spiral galaxy that is visible to the
left of the ring galaxy in the image is a coincidental background
galaxy that is not interacting with the ring.

The resulting gravitational shock imparted due to the collision
drastically changes the orbits of stars and gas in the target
galaxy’s disk, causing them to rush outward, somewhat like ripples
in a pond after a large rock has been thrown in. As the ring plows
outward into its surroundings, gas clouds collide and are compressed.
The clouds can then contract under their own gravity, collapse, and
form an abundance of new stars.

The rampant star formation explains why the ring is so blue: It
is continuously forming massive, young, hot stars, which are blue
in color. Another sign of robust star formation is the pink
regions along the ring. These are rarefied clouds of glowing
hydrogen gas, fluorescing because of the strong ultraviolet light
from the newly formed massive stars.

Anyone who lives on planets embedded in the ring would be treated
to a view of a brilliant band of blue stars arching across the
heavens. The view would be relatively short-lived because
theoretical studies indicate that the blue ring will not continue
to expand forever. After about 300 million years, it will reach a
maximum radius, and then begin to disintegrate.

The Hubble Heritage Team used the Hubble Advanced Camera for
Surveys to take this image in January 2004. The team used a
combination of four separate filters that isolate blue, green,
red, and near-infrared light to create the color image.

Electronic images and additional information are available at:

The Space Telescope Science Institute (STScI) is operated by
the Association of Universities for Research in Astronomy, Inc.
(AURA), for NASA, under contract with the Goddard Space Flight
Center, Greenbelt, MD. The Hubble Space Telescope is a project
of international cooperation between NASA and the European Space
Agency (ESA).