By SpaceRef Editor
November 27, 2011
Filed under Commerce, NASA HQ, US 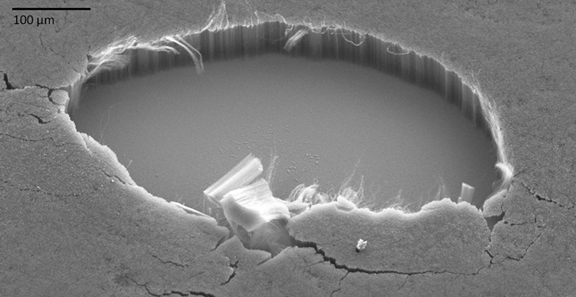 This close-up view (only about 0.03 inches wide) shows the internal structure of a carbon-nanotube coating that absorbs about 99 percent of the ultraviolet, visible, infrared, and far-infrared light that strikes it. A section of the coating, which was grown on smooth silicon, was purposely removed to show the tubes’ vertical alignment. (Credit: Stephanie Getty, NASA Goddard) Larger image

NASA engineers have produced a material that absorbs on average more than 99 percent of the ultraviolet, visible, infrared, and far-infrared light that hits it — a development that promises to open new frontiers in space technology.

The team of engineers at NASA’s Goddard Space Flight Center in Greenbelt, Md., reported their findings recently at the SPIE Optics and Photonics conference, the largest interdisciplinary technical meeting in this discipline. The team has since reconfirmed the material’s absorption capabilities in additional testing, said John Hagopian, who is leading the effort involving 10 Goddard technologists.

“The reflectance tests showed that our team had extended by 50 times the range of the material’s absorption capabilities. Though other researchers are reporting near-perfect absorption levels mainly in the ultraviolet and visible, our material is darn near perfect across multiple wavelength bands, from the ultraviolet to the far infrared,” Hagopian said. “No one else has achieved this milestone yet.”

The nanotech-based coating is a thin layer of multi-walled carbon nanotubes, tiny hollow tubes made of pure carbon about 10,000 times thinner than a strand of human hair. They are positioned vertically on various substrate materials much like a shag rug. The team has grown the nanotubes on silicon, silicon nitride, titanium, and stainless steel, materials commonly used in space-based scientific instruments. (To grow carbon nanotubes, Goddard technologist Stephanie Getty applies a catalyst layer of iron to an underlayer on silicon, titanium, and other materials. She then heats the material in an oven to about 1,382 degrees Fahrenheit. While heating, the material is bathed in carbon-containing feedstock gas.)

The tests indicate that the nanotube material is especially useful for a variety of spaceflight applications where observing in multiple wavelength bands is important to scientific discovery. One such application is stray-light suppression. The tiny gaps between the tubes collect and trap background light to prevent it from reflecting off surfaces and interfering with the light that scientists actually want to measure. Because only a small fraction of light reflects off the coating, the human eye and sensitive detectors see the material as black.

In particular, the team found that the material absorbs 99.5 percent of the light in the ultraviolet and visible, dipping to 98 percent in the longer or far-infrared bands. “The advantage over other materials is that our material is from 10 to 100 times more absorbent, depending on the specific wavelength band,” Hagopian said.

“We were a little surprised by the results,” said Goddard engineer Manuel Quijada, who co-authored the SPIE paper and carried out the reflectance tests. “We knew it was absorbent. We just didn’t think it would be this absorbent from the ultraviolet to the far infrared.” 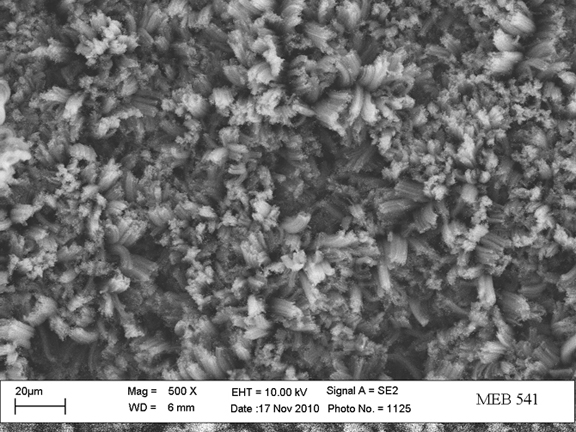 This high-magnification image, taken with an electron microscope, shows an even closer view of the hollow carbon nanotubes. A coating made of this material is seen as black by the human eye and sensitive detectors because the tiny gaps between the tubes collect and trap light, preventing reflection. (Credit: Stephanie Getty, NASA Goddard) > Larger image

If used in detectors and other instrument components, the technology would allow scientists to gather hard-to-obtain measurements of objects so distant in the universe that astronomers no longer can see them in visible light or those in high-contrast areas, including planets in orbit around other stars, Hagopian said. Earth scientists studying the oceans and atmosphere also would benefit. More than 90 percent of the light Earth-monitoring instruments gather comes from the atmosphere, overwhelming the faint signal they are trying to retrieve.

Currently, instrument developers apply black paint to baffles and other components to help prevent stray light from ricocheting off surfaces. However, black paints absorb only 90 percent of the light that strikes it. The effect of multiple bounces makes the coating’s overall advantage even larger, potentially resulting in hundreds of times less stray light.

In addition, black paints do not remain black when exposed to cryogenic temperatures. They take on a shiny, slightly silver quality, said Goddard scientist Ed Wollack, who is evaluating the carbon-nanotube material for use as a calibrator on far-infrared-sensing instruments that must operate in super-cold conditions to gather faint far-infrared signals emanating from objects in the very distant universe. If these instruments are not cold, thermal heat generated by the instrument and observatory, will swamp the faint infrared they are designed to collect.

Black materials also serve another important function on spacecraft instruments, particularly infrared-sensing instruments, added Goddard engineer Jim Tuttle. The blacker the material, the more heat it radiates away. In other words, super-black materials, like the carbon nanotube coating, can be used on devices that remove heat from instruments and radiate it away to deep space. This cools the instruments to lower temperatures, where they are more sensitive to faint signals.

To prevent the black paints from losing their absorption and radiative properties at long wavelengths, instrument developers currently use epoxies loaded with conductive metals to create a black coating. However, the mixture adds weight, always a concern for instrument developers. With the carbon-nanotube coating, however, the material is less dense and remains black without additives, and therefore is effective at absorbing light and removing heat. “This is a very promising material,” Wollack said. “It’s robust, lightweight, and extremely black. It is better than black paint by a long shot.”