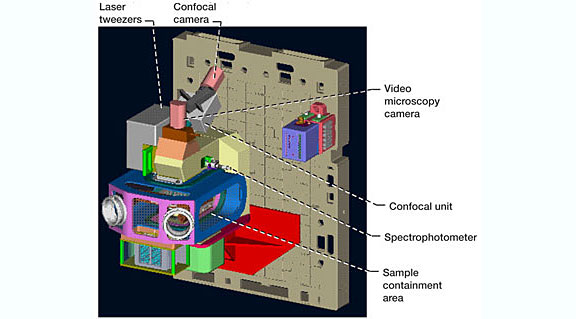 NASA began testing a new multi-capability microscope this week on the International Space Station. It will help scientists study the effects of the space environment on physics and biology aboard the orbiting laboratory. The microscope is isolated from vibrations on the station, allowing it to obtain clear, high-resolution images. Using high-resolution magnification, scientists can examine microorganisms and individual cells of plants and animals, including humans.

The microscope will allow real-time study of the effects of the space environment without the need to return samples to Earth. Any living specimens returned to Earth must endure the effects of re-entry through the atmosphere. The ability to use the Light Microscopy Module (LMM) on station will enable scientists to study data unaffected by re-entry.

“We really need to maximize life science investigations conducted on the International Space Station,” said Jacob Cohen, principal investigator of the technology demonstration and a researcher at NASA’s Ames Research Center, Moffett Field, Calif. “It’s really amazing to be able to remotely manage, optimize and troubleshoot experiments observed with a microscope in space without the need to return the samples back to Earth. This microscope is helping fulfill the vision of a true laboratory in space.”

The biological samples for the LMM launched on space shuttle Discovery’s STS-133 mission on Feb. 24. They include eight fixed slides containing yeast; bacteria; a leaf; a fly; a butterfly wing; tissue sections and blood; six containers of live C. elegans worms, an organism biologists commonly study; a typed letter “r” and a piece of fluorescent plastic. The wing is from a previous study, Butterflies in Space, involving students from around the country, and flown on STS-129 in 2009. Some of the worms are descendants of those that survived the space shuttle Columbia (STS-107) accident; and others are modified to fluoresce. Scientists commonly attach green, yellow and red florescent proteins to study gene expression.

“Operating the LMM on the space station has been a goal of NASA’s Life and Physical Sciences Program for many years,” said Ron Sicker, LMM project manager at NASA’s Glenn Research Center in Cleveland. “Scientists and engineers at Glenn modified the commercial microscope in the LMM with 23 micro motors and cameras to allow remote control operations.”

Cohen and Sicker expect the LMM to perform the same as a microscope on Earth. In the future, the microscope could be used to assist in maintenance of station crew health, advance our knowledge of the effects of space on biology and contribute to the development of applications for space exploration and on Earth. This technology demonstration was developed by Ames and Glenn, which developed and manages the LMM. The Advanced Capabilities Division in the Exploration Systems Mission Directorate at NASA Headquarters in Washington, funds the project.

“This is a facility to support research in both physical and life sciences by NASA-funded and National Laboratory users,” said Julie Robinson, International Space Station Program scientist at NASA’s Johnson Space Center in Houston. “It gives us a capability not available before that allows more types of research to be done.”

For more information about the Light Microscopy Module, visit: http://issresearchproject.grc.nasa.gov/Investigations/LMM