By SpaceRef Editor
December 8, 2011
Filed under Commerce, NASA HQ, US 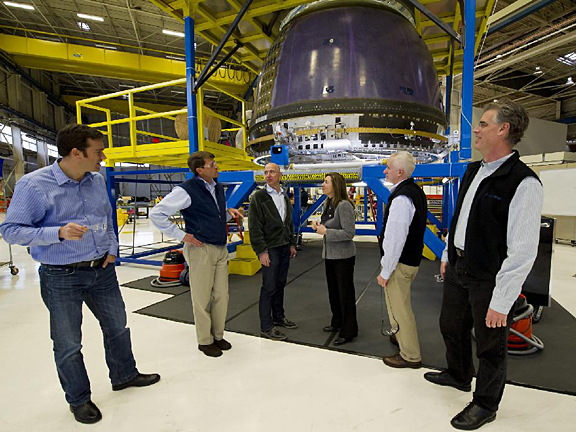 NASA Deputy Administrator Lori Garver, fourth from left meets Blue Origin Founder Jeff Bezos, third from left, next to Blue Origin’s crew capsule along with other Blue Origin team members, Bretton Alexander, left, Jeff Ashby, second from left, Rob Meyerson, fifth from left, and Robert Millman at the company’s headquarters in Kent, Wash., Thursday, Dec. 8, 2011. Blue Origin is one of the awardees selected to receive a Space Act Agreement (SAA) during the second round of the Commercial Crew Development Program (CCDev2). These awards, which began in 2009, were made to stimulate efforts within U.S. industry to develop and demonstrate human spaceflight capabilities and advance commercial crew space transportation system concepts. Current efforts among the companies will mature the design and development of elements of the system, such as launch vehicles and spacecraft. Image Credit: NASA and Bill Ingalls Larger images.

“Blue Origin is creating cutting edge technologies to take us to low Earth orbit,” Garver said. “Like all of our commercial partners, they’re making real progress and opening up a new job-creating segment of the economy that will allow NASA to focus on our next big challenges — missions to asteroids and Mars.”

Garver also announced Blue Origin has delivered its BE-3 engine thrust chamber assembly — the engine’s combustion chamber and nozzle — to NASA’s Stennis Space Center in Mississippi, where testing will begin in April 2012. The company is developing a reusable launch vehicle, designed to take off and land vertically, and an escape system for its crewed spacecraft. Testing will take place on the center’s E-1 Test Stand.

“We’re delighted Blue Origin is taking advantage of Stennis, a center with a long record of propulsion testing from the dawn of the Space Age, to test the rocket engines of the future,” Garver said.

“We appreciate the opportunity to work with the depth of expertise and utilize the facilities at Stennis for our engine testing, and are glad to have the test hardware onsite and ready to go,” said Rob Meyerson, president and program manager at Blue Origin.