By SpaceRef Editor
May 11, 2011
Filed under Dawn, Jet Propulsion Laboratory, US

NASA’s Dawn spacecraft has obtained its first image of the giant asteroid Vesta, which will help fine-tune navigation during its approach. Dawn expects to achieve orbit around Vesta on July 16, when the asteroid is about 117 million miles from Earth.

The image from Dawn’s framing cameras was taken on May 3 when the spacecraft began its approach and was approximately 752,000 miles (1.21 million km) from Vesta. The asteroid appears as a small, bright pearl against a background of stars. Vesta also is known as a protoplanet, because it is a large body that almost formed into a planet.

Vesta is 330 miles (530 km) in diameter and the second most massive object in the asteroid belt. Ground- and space-based telescopes obtained images of the bright orb for about two centuries, but with little surface detail.

Mission managers expect Vesta’s gravity to capture Dawn in orbit on July 16. To enter orbit, Dawn must match the asteroid’s path around the sun, which requires very precise knowledge of the body’s location and speed. By analyzing where Vesta appears relative to stars in framing camera images, navigators will pin down its location and enable engineers to refine the spacecraft’s trajectory.

Dawn will start collecting science data in early August at an altitude of approximately 1,700 miles (2,700 km) above the asteroid’s surface. As the spacecraft gets closer, it will snap multi-angle images allowing scientists to produce topographic maps. Dawn will later orbit at approximately 120 miles (200 km) to perform other measurements and obtain closer shots of parts of the surface. Dawn will remain in orbit around Vesta for one year. After another long cruise phase, Dawn will arrive in 2015 at its second destination, Ceres, an even more massive body in the asteroid belt. 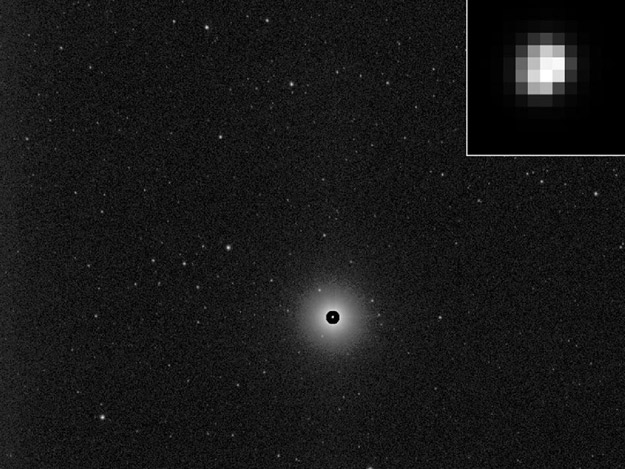 Dawn’s First Glimpse of Vesta — Processed: This image, processed to show the true size of the giant asteroid Vesta, shows Vesta in front of a spectacular background of stars. It was obtained by the framing camera aboard NASA’s Dawn spacecraft on May 3, 2011, from a distance of about 1.2 million kilometers (750,000 miles). Since Vesta is so bright that it outshines its starry background, Dawn team members commanded a long exposure time to make the stars visible. They corrected the resulting exaggerated size of Vesta by superimposing a short exposure image of the target asteroid, showing its true size. Vesta is the small, bright pearl in the middle of the image. Vesta is 330 miles (530 kilometers) in diameter and the second most massive object in the asteroid belt. But, as the inset shows, Vesta is approximately five pixels across in size in Dawn’s early approach images.

Gathering information about these two icons of the asteroid belt will help scientists unlock the secrets of our solar system’s early history. The mission will compare and contrast the two giant asteroids shaped by different forces. Dawn’s science instruments will measure surface composition, topography and texture. Dawn also will measure the tug of gravity from Vesta and Ceres to learn more about their internal structures. The spacecraft’s full odyssey will take it on a 3-billion-mile (5-billion-km) journey, which began with its launch in September 2007.

Dawn’s mission to Vesta and Ceres is managed by JPL for NASA’s Science Mission Directorate in Washington. Dawn is a project of the directorate’s Discovery Program, managed by NASA’s Marshall Space Flight Center in Huntsville, Ala.

The University of California in Los Angeles is responsible for overall Dawn mission science. Orbital Sciences Corp. of Dulles, Va., designed and built the spacecraft. The framing cameras were developed and built under the leadership of the Max Planck Institute for Solar System Research in Katlenburg-Lindau in Germany, with significant contributions by the German Aerospace Center (DLR) Institute of Planetary Research in Berlin and in coordination with the Institute of Computer and Communication Network Engineering in Braunschweig. The framing camera project is funded by NASA, the Max Planck Society and DLR.

To view the image and obtain more information about Dawn, visit:
http://www.nasa.gov/dawn