Images returned during Cassini’s recent flyby of Titan show captivating evidence of what appears to be a large shoreline cutting across the smoggy moon’s southern hemisphere.  Hints that this area was once wet, or currently has liquid present, are evident.

“We’ve been looking for evidence of oceans or seas on Titan for some time.  This radar data is among the most telling evidence so far for a shoreline,” said Steve Wall, radar deputy team leader from NASA’s Jet Propulsion Laboratory, Pasadena, Calif.

The new radar images can be seen at: http://www.nasa.gov/cassini and http://saturn.jpl.nasa.gov .

The images show what looks like a shoreline dividing a distinct bright and dark region roughly 1,700 kilometers long by 170 kilometers wide (1,060 by 106 miles).  Directly to the right of a bright and possibly rough area is one that is very dark and smooth. 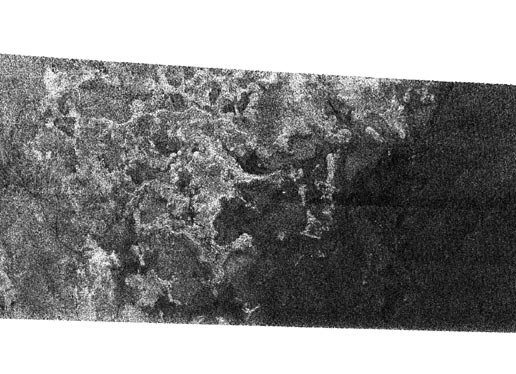 “This is the area where liquid or a wet surface has most likely been present, now or in the recent past, said Wall.  “Titan probably has episodic periods of rainfall or massive seepages of liquid from the ground.”

The brightness patterns in the dark area indicate that it may once have been flooded with liquid that may now have partially receded.  Bay-like features also lead scientists to speculate that the bright-dark boundary is most likely a shoreline.

Taken together with the two other radar passes in October 2004 and February 2005, these very high resolution images have identified at least two distinct types of drainage and channel formation on Titan.  Some channels in images from this pass are long and deep, with angular patterns and few tributaries, suggesting that fluids flow over great distances. By contrast, others show channels that form a denser network that might indicate rainfall.

Dr. Larry Soderblom with the U.S. Geological Survey in Flagstaff, Ariz., said, “It looks as though fluid flowed in these channels, cutting deeply into the icy crust of Titan.  Some of the channels extend over 100 kilometers (60 miles).  Some of them may have been fed by springs, while others are more complicated networks that were likely filled by rainfall.”

Titan has an environment somewhat similar to that of Earth before biological activity forever altered the composition of Earth’s atmosphere. The major difference on Titan, however, is the absence of liquid water, and Titan’s very low temperature.  With a thick, nitrogen-rich atmosphere, Titan was until recently presumed to hold large seas or oceans of liquid methane. Cassini has been in orbit around Saturn for a year and has found no evidence for these large seas.

Cassini encountered an anomaly with one of two solid-state recorders during the Sept. 7 close flyby, resulting in some data not being recorded.  Half of the data from the flyby was received, much to the delight of anxious scientists.  The spacecraft team is troubleshooting the cause, and early indications point to a software problem that would be correctable with no long-term impacts.

This was Cassini’s eighth out of 45 Titan flybys planned in the nominal four-year tour.  The next radar pass will be Oct. 26 when the team will focus on the Huygens probe landing site close to the equator.

The Cassini-Huygens mission is a cooperative project of NASA, the European Space Agency and the Italian Space Agency.  JPL, a division of the California Institute of Technology in Pasadena, manages the Cassini-Huygens mission for NASA’s Science Mission Directorate, Washington.  The Cassini orbiter was designed, developed and assembled at JPL. The radar instrument team is based at JPL, working with team members from the United States and several European countries.