Saturn’s moon Titan shows a sharp contrast between its smooth and rough edges in a new false-color radar image.

Titan’s surface lies beneath a thick coat of hazy clouds, but Cassini’s radar instrument can peer through to show finer surface features.  Scientists have added color to emphasize finer details on Titan, as shown in the image.

This image can be viewed at http://saturn.jpl.nasa.gov  and http://www.nasa.gov/cassini .  To provide a better perspective of the surface features, the color image is shown next to a black-and-white image that was previously released.

Brighter areas may correspond to rougher terrains, slopes facing the radar, or different materials.  The pink colors enhance smaller details on the surface, while the green color represents smoother areas. Winding linear features that cut across dark areas may be ridges or channels, although their nature is not yet understood.  A large dark circular feature is seen at the western (top left) end of the image, but very few features on Titan resembling fresh impact craters are seen.

The area shown is in the northern hemisphere of Titan and is about 150 kilometers (93 miles) wide by 300 kilometers (186 miles) long.  The image is a part of a larger strip created from data taken on Oct. 26, 2004, when the Cassini spacecraft flew approximately 1,200 kilometers (745 miles) above Titan’s surface. 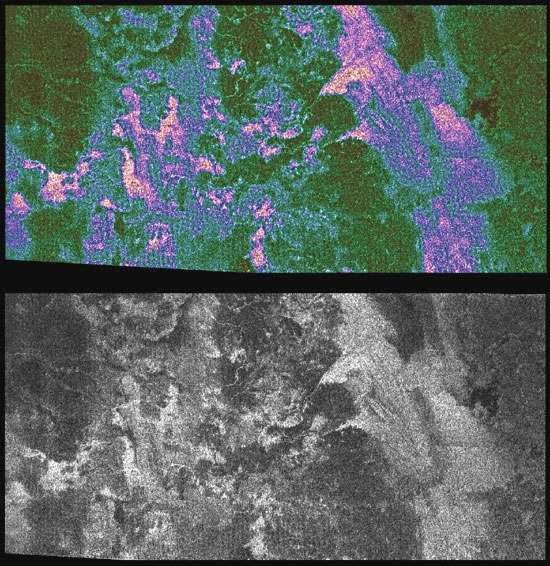 The radar instrument works by bouncing radio signals off Titan’s surface and timing their return. This is similar to timing the returning echo of your voice across a canyon to tell how wide the canyon is.  Approximately 1 percent of Titan’s surface was mapped during the Oct. 26 flyby.

The Cassini-Huygens mission is a cooperative project of NASA, the European Space Agency and the Italian Space Agency. The Jet Propulsion Laboratory, a division of the California Institute of Technology in Pasadena, manages the Cassini-Huygens mission for NASA’s Science Mission Directorate, Washington, D.C. The radar instrument team is based at JPL.