Encircled in purple stratospheric haze, Saturn’s largest moon, Titan,
appears as a softly glowing sphere in this colorized image taken on
July 3, 2004, one day after Cassini’s first flyby of that moon. Titan
has a dense atmosphere composed primarily of nitrogen with a few
percent methane. The atmosphere can undergo photochemical processes
to form hazes.

Images like this one reveal some of the key steps in the formation and
evolution of Titan’s haze. The process is thought to begin in the
high atmosphere, at altitudes above 400 kilometers (250 miles), where
ultraviolet light breaks down methane and nitrogen molecules. The
products are believed to react to form more complex organic molecules
containing carbon, hydrogen and nitrogen that can combine to form the
very small particles seen as haze.

This ultraviolet view of Titan has been falsely colored. The main
body is colored pale orange as seen in true color images. Above the
orange disc are two distinct layers of atmospheric haze that have been
brightened and falsely colored violet to enhance their visibility. It
is not currently understood why there are two separate haze layers.
This and other questions await answers as the four-year Cassini tour
continues, with many more planned flybys of Titan. The upcoming
October 2004 flyby of Titan will be 30 times closer than that of July
2. 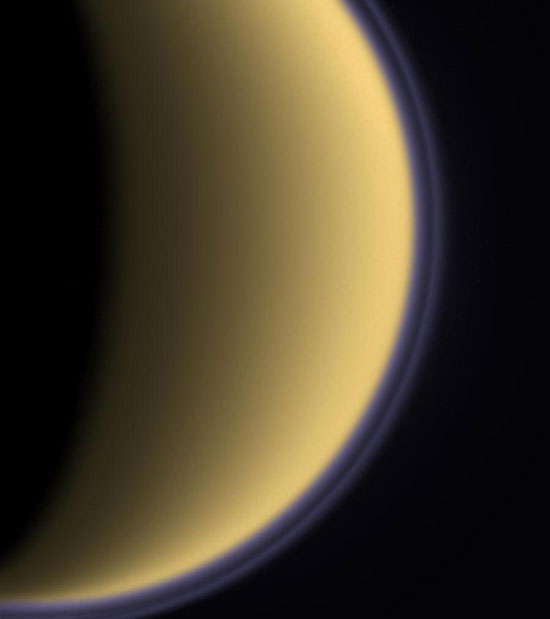 The Cassini-Huygens mission is a cooperative project of NASA, the
European Space Agency and the Italian Space Agency. The Jet Propulsion
Laboratory, a division of the California Institute of Technology in
Pasadena, manages the Cassini-Huygens mission for NASA’s Office of
Space Science, Washington, D.C. The Cassini orbiter and its two
onboard cameras were designed, developed and assembled at JPL. The
imaging team is based at the Space Science Institute, Boulder, Colo.

For this and other images and information about the Cassini-Huygens
mission, visit http://saturn.jpl.nasa.gov and
http://www.nasa.gov/cassini . Images are also available at the
Cassini imaging team home page, http://ciclops.org .