On its recent close flyby of Mimas, the Cassini spacecraft found the Saturnian moon looking battered and bruised, with a surface that may be the most heavily cratered in the Saturn system.

The Aug. 2 flyby of Saturn’s ‘Death Star’ moon returned eye-catching images of its most distinctive feature, the spectacular 140-kilometer diameter (87-mile) landslide-filled Hershel crater. Numerous rounded and worn-out craters, craters within other craters and long grooves reminiscent of those seen on asteroids are also seen in the new images.

The new Mimas images are available at http://saturn.jpl.nasa.gov, http://www.nasa.gov/cassini and http://ciclops.org .  Also available is an approach movie showing Mimas, and a zoom and pan across the surface of one of the highest resolution images.

The closest images show Mimas, measuring 397 kilometers (247 miles) across, in the finest detail yet seen.  One dramatic view acquired near Cassini’s closest approach shows the moon against the backdrop of Saturn’s rings.  A false color composite image reveals a region in blue and red of presumably different composition or texture just west of, and perhaps related to, the Hershel crater. 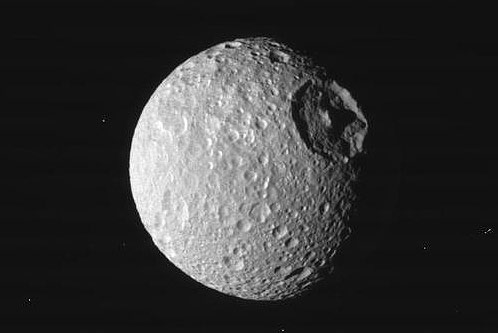 Scientists hope that analysis of the images will tell them how many crater-causing impactors have coursed through the Saturn system, and where those objects might have come from.  There is also the suspicion, yet to be investigated, that the grooves, first discovered by NASA’s Voyager spacecraft but now seen up close, are related to the giant impact that caused the biggest crater of all, Herschel, on the opposite side of the moon.

The Cassini-Huygens mission is a cooperative project of NASA, the European Space Agency and the Italian Space Agency.  The Jet Propulsion Laboratory, a division of the California Institute of Technology in Pasadena, manages the Cassini-Huygens mission for NASA’s Science Mission Directorate, Washington, D.C.  The Cassini orbiter and its two onboard cameras were designed, developed and assembled at JPL. The imaging operations center is based at the Space Science Institute in Boulder, Colo.