NASA’s Cassini spacecraft has obtained new detailed images of the south polar region of Saturn’s moon Enceladus. The data reveal distinctive geological features and the most youthful terrain seen on the moon. These findings point to a very complex evolutionary history for Saturn’s brightest, whitest satellite.

Cassini’s July 14 flyby brought it within 109 miles of the surface of the icy moon. The close encounter revealed a landscape near the south pole almost entirely free of impact craters. The area is also littered with house-sized ice boulders carved by tectonic patterns unique to Enceladus. These features set the region apart from the rest of the moon.

As white as fresh snow, Enceladus has the most reflective surface in the solar system. Previous Cassini flybys revealed Enceladus, in contrast to Saturn’s other icy moons, has lightly cratered regions, fractured plains and wrinkled terrain. 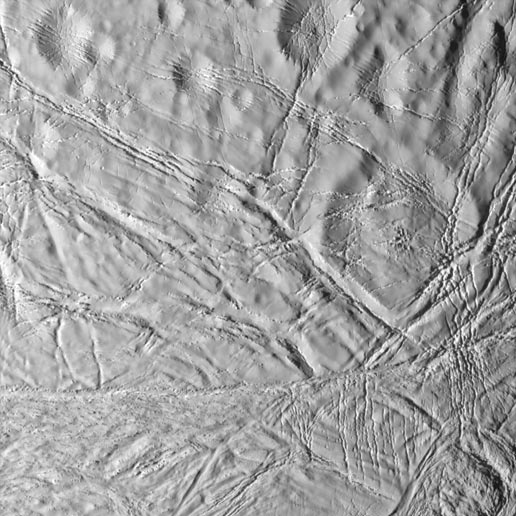 The new findings add to the story of a body that has undergone multiple episodes of geologic activity spanning a considerable portion of its lifetime. The moon’s southern most latitudes have likely seen the most recent activity.

These same latitudes may also bear the scars of a shift in the moon’s spin rate. If true, this speculation may help scientists understand why Enceladus has a tortured-looking surface, with pervasive crisscrossing faults, folds and ridges. The most remarkable images show ice blocks, about 33 to 328 feet across in a region that is unusual in its lack of the very fine-grained frost that seems to cover the rest of Enceladus.

“A landscape littered with building-sized blocks was not expected,” said Dr. Peter Thomas, an imaging-team member from Cornell University, Ithaca, N.Y. “The minimal cover of finer material and the preservation of small, crossing fracture patterns in the surrounding areas indicate that this region is young compared to the rest of Enceladus.”

False color composites of this region, created from the most recent images, show the largest exposures of coarse-grained ice fractures seen anywhere on the satellite, which also supports the notion of a young surface at southern latitudes. Some of the latest images may hint at the answer. The images revealed additional examples of a distinctive “Y-shaped” tectonic feature on Enceladus. In this unusual element, parallel ridges and valleys appear to systematically fold and deform around the south polar terrains.

“These tectonic features define a boundary that isolates the young, south polar terrains from older terrains on Enceladus,” noted Dr. Paul Helfenstein, an associate of the imaging team also at Cornell University. “Their placement and orientation may tell us a very interesting story about the way the rotation of Enceladus has evolved over time and what might have provided the energy to power the geologic activity that has wracked this moon.”

The apparent absence of sizable impact craters also suggests the south pole is younger than other terrain on Enceladus. These indications of youth are of great interest to scientists who have long suspected Enceladus as one possible source of material for Saturn’s extensive and diffuse E ring, which coincides with the moon’s orbit. Young terrain requires a means to generate the heat needed to modify the surface. Other Cassini instrument teams are working to understand data about temperature, composition, particles and magnetic field. Together with image interpretation, these data can create a more complete picture.

The Cassini-Huygens mission is a cooperative project of NASA, the European Space Agency and the Italian Space Agency. The Jet Propulsion Laboratory (JPL), a division of the California Institute of Technology in Pasadena, manages the mission for NASA’s Science Mission Directorate. The imaging operations center is based at the Space Science Institute in Boulder, Colo.

These Cassini images are available on the Web at: