With eyes sharper than any that have peered at Saturn
before, the Cassini spacecraft has uncovered two moons, which
may be the smallest bodies so far seen around the ringed
planet.

“One of our major objectives in returning to Saturn was to
survey the entire system for new bodies,” said Dr. Carolyn
Porco, imaging team leader, Space Science Institute, Boulder,
Colo. “It’s really gratifying to know that among all the
other fantastic discoveries we will make over the next four
years, we can now add the confirmation of two new moons,
unnoticed around Saturn for billions of years until now,” she
added. 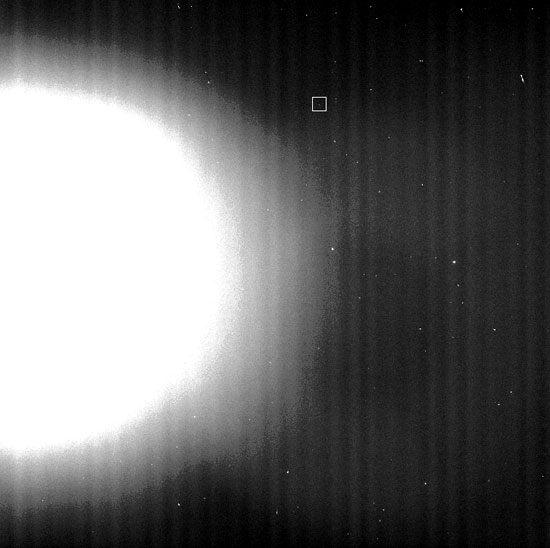 The moons were first seen by Dr. Sebastien Charnoz, a
planetary dynamicist working with Dr. Andre Brahic, imaging
team member at the University of Paris. “Discovering these
faint satellites was an exciting experience, especially the
feeling of being the first person to see a new body of our
solar system,” said Charnoz. “I had looked for such objects
for weeks while at my office in Paris, but it was only once
on holiday, using my laptop, that my code eventually detected
them. This tells me I should take more holidays,” Charnoz
said.

The smallest previously known moons around Saturn are about
20 kilometers (12 miles) across. Scientists expected that
moons as small as S/2004 S1 and S/2004 S2 might be found
within gaps in the rings and perhaps near the F ring, but
they are surprised these small bodies are between two major
moons. Small comets careening around the outer solar system
would be expected to collide with small moons and break them
to bits.

The fact that these moons exist where they do might provide
limits on the number of small comets in the outer solar
system, a quantity essential for understanding the Kuiper
Belt of comets beyond Neptune and the cratering histories of
the moons of the giant planets.

“A comet striking an inner moon of Saturn moves many times
faster than a speeding bullet,” said Dr. Luke Dones, an
imaging team member from the Southwest Research Institute in
Boulder, Colo. “If small, house-sized comets are common,
these moons should have been blown apart many times by
cometary impacts during the history of the solar system. The
disrupted moon would form a ring, and then most of the
material would eventually gather back together into a moon.
However, if small comets are rare, as they seem to be in the
Jupiter system, the new moons might have survived since the
early days of the solar system,” he added.

Moons surrounding the giant planets generally are not found
where they originally formed because tidal forces from the
planet can cause them to drift from their original
locations. In drifting, they may sweep through locations
where other moons disturb them, making their orbits eccentric
or inclined relative to the planet’s equator. One of the new
moons might have undergone such an evolution.

Upcoming imaging sequences will scour the gaps in Saturn’s
rings in search of moons that are believed to be there.
Meanwhile, Cassini scientists are eager to get a closer look,
if at all possible, at their new finds. Porco said, “We are
at this very moment looking to see what the best times are
for retargeting. Hopefully, we haven’t seen the last of
them,” she added.

The Cassini-Huygens mission is a cooperative project of NASA,
the European Space Agency and the Italian Space Agency. The
Jet Propulsion Laboratory (JPL) manages the Cassini-Huygens
mission for NASA’s Science Mission Directorate, Washington,
D.C. The Cassini orbiter and its two onboard cameras were
designed, developed and assembled at JPL. The imaging team is
based at the Space Science Institute, Boulder, Colo.
For images and information about the Cassini-Huygens
missionon the Internet, visit:
http://saturn.jpl.nasa.gov and
http://www.nasa.gov/cassini
Images are also available at the Cassini imaging team
Internet site: http://ciclops.org