Using an innovative camera on NASA’s Cassini spacecraft, scientists have captured images of a radiation belt inside the rings of Saturn and have the clearest picture yet of the planet’s giant magnetosphere, according to a mid-year report of the spacecraft published today in the journal Science.

The Cassini spacecraft entered Saturn’s orbit in July 2004, kicking off a four-year study of the sixth planet from the sun. Among the 12 science instruments on the spacecraft is the Magnetospheric Imaging Instrument (MIMI) – developed by the Johns Hopkins University Applied Physics Laboratory (APL) – which scientists are using to study the energetic charged particle environment at Saturn and obtain images of the ringed planet’s magnetosphere.

“Every time we fly a new instrument in space, it reveals new vistas of whatever object we happen to be studying,” says Dr. Stamatios (Tom) Krimigis, principal investigator for the MIMI experiment, of APL.

This time, says Krimigis, the MIMI instrument has enabled scientists to

“visualize the invisible” – to “see” the plasma and radiation belts in Saturn’s environment in an image; to discover that the belts are more intense on the night-side of the planet; that there is an unexpected radiation belt inward of the “D” ring, the fourth major ring closest to the tenuous upper atmosphere of the planet; and that there is a virtual soup of ions that derive from the dissociation of water, most likely due to radiation impacting the rings. 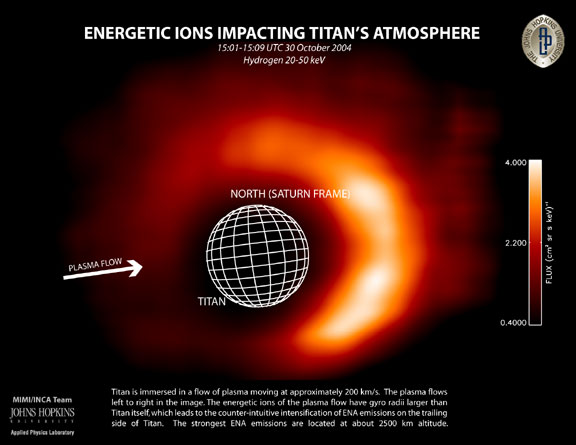 These images were captured during Saturn orbit insertion with MIMI’s Ion and Neutral Camera (INCA), which measures the three-dimensional distribution, velocities and rough composition of magnetospheric and interplanetary ions for regions in which the energetic ion fluxes are very low. It also provides a global view of the energetic neutral emission of hot plasmas in the Saturnian magnetosphere, measuring the composition and velocities of those energetic neutrals for each image pixel.

“By detecting various energetic particles and discriminating among them

according to energy and mass, the camera is able to obtain remote images of the global distribution of these particles,” says Dr. Donald Mitchell of APL, who leads the camera science team.

“Using INCA, we also discovered a radiation belt in a place where no spacecraft can go – inside the planet’s rings,” says APL’s Dr. Ed Roelof, a co-investigator on the MIMI team. “We never knew this belt existed, but we saw it and were able to determine some of its properties and characteristics.”

The properties of the main radiation belts are perhaps among the more significant of the findings, says Dr. Doug Hamilton of the University of Maryland, College Park, who led the instrument team measuring the composition. “It’s comprised mostly of oxygen and water products,” he says. “That is most likely the result of the bombardment of the planet’s rings and the icy moons by the radiation trapped in Saturn’s magnetic field. And by this bombardment, the water is released and it becomes charged.”

According to Krimigis, the ability to visualize a planet’s magnetosphere will enable scientists to better monitor space weather. “This will benefit science and, in the case of Earth, may lead to space weather forecasts that will give advance warning of electromagnetic storms, which in the past have disrupted communications and crippled electrical power grids.”

The Cassini-Huygens mission is a cooperative project of NASA, ESA and the Italian Space Agency. The Jet Propulsion Laboratory, a division of the California Institute of Technology in Pasadena, manages the mission for

The Applied Physics Laboratory is a not-for-profit laboratory and division of The Johns Hopkins University. APL conducts research and development primarily for national security and for non-defense projects of global significance. 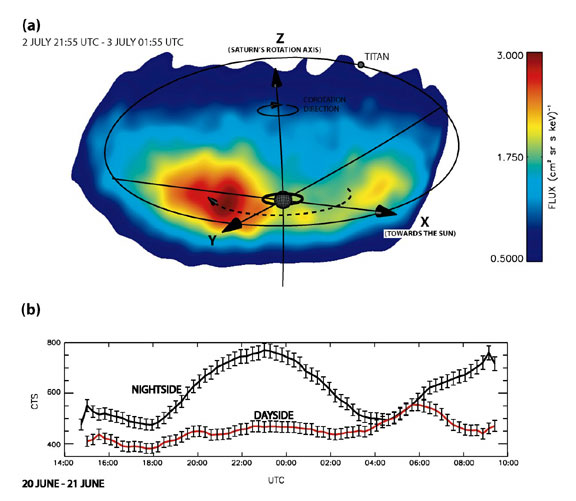 The image of Saturn’s magnetosphere (a) was captured by the Ion and Neutral Camera (INCA), part of the Magnetospheric Imaging Instrument (MIMI) on NASA’s Cassini spacecraft, shortly after Cassini entered the planet’s orbit in July 20004. On June 20-21, 2004, as Cassini approached Saturn’s orbit, the energetic neutral atom (ENA) emissions captured by INCA (b) revealed that the magnetosphere rotated around the planet once about every 11 hours. Credit: Johns Hopkins University Applied Physics Laboratory (as published in the 25 February 2005 issue of Science.) 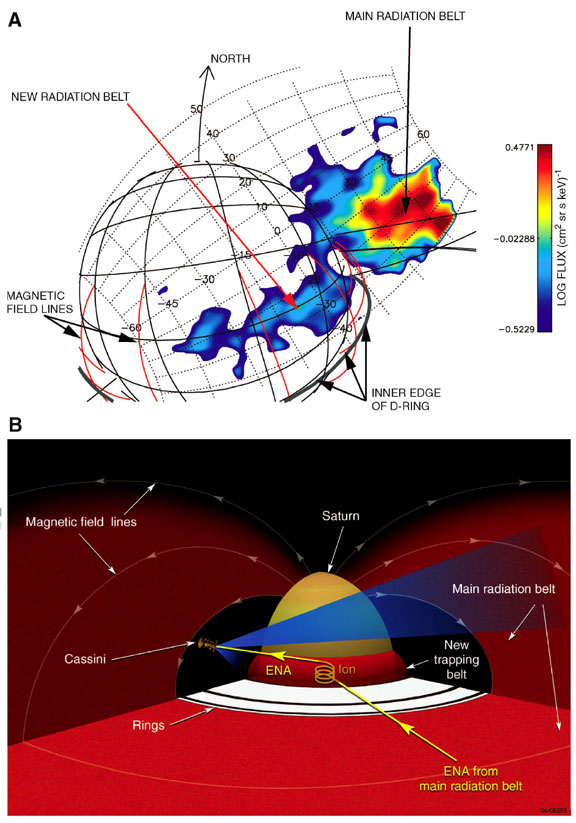 Image A shows an energetic neutral atom (ENA) image captured by the Ion and Neutral Camera, part of the Magnetospheric Imaging Instrument (MIMI) on NASA’s Cassini spacecraft, as Cassini passed over Saturn’s rings. The schematic (B) illustrates the process by which these atoms from Saturn’s outer radiation belt populate the low altitude inner radiation belt. Credit: Johns Hopkins University Applied Physics Laboratory (as published in the 25 February 2005 issue of Science.)