NASA’s Langley Research Center, Hampton, Va., began a new
phase of testing today for the Orion crew module, NASA’s next generation
spacecraft. Now under development, the Orion crew exploration vehicle will
carry astronauts to the International Space Station and be part of the space
flight system to conduct sustained human exploration of the moon.

The series of tests will evaluate the crew module energy absorbing seat
system that will protect the crew under a range of landing conditions after
returning from a mission to the space station or the moon.

During this phase of testing, engineers will use a 20,000-pound apparatus
called the Crew Impact Attenuation System Test Article. Designed and
fabricated at Langley, the test article represents the Orion crew module
seat pallet that will accommodate between four and six astronauts. Energy
absorbing struts attached to the seat pallet and connected to the crew
module structure will reduce loads felt by the crew during landing. 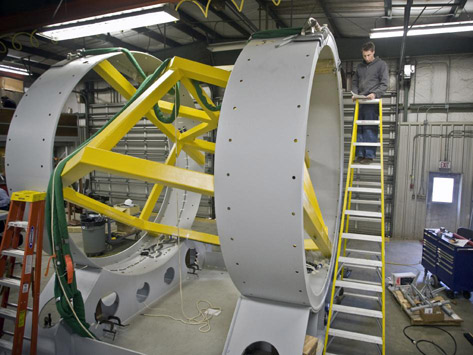 Langley engineers recently designed and fabricated the 20,000-pound test article which completed seven preliminary impact tests at Langley’s Landing and Impact Dynamics gantry since the start of the year. Later this month, technicians will attach energy absorbing struts to ready the hardware for testing the Orion seat pallet system.

The CIAS test article emulates the Orion crew module interface to the seat pallet that will accommodate between four and six astronauts. Once energy absorbing struts are attached to the seat pallet, a new phase of testing for Orion will begin.

Engineers will perform 10 vertical drop tests at the Landing and Impact
Research Facility, a 240-foot-tall steel structure also known as the gantry.
The test article will be dropped vertically from as high as 18 feet onto
crushable honeycomb material, which is sized to represent a broad range of
landing conditions Orion could face.

“The Crew Impact Attenuation System Testing is critical to the safety of
future Orion crew members,” says Keith Johnson, aerospace engineer at NASA
Langley. “When Orion splashes down into the ocean, this system will reduce
loads on the astronauts and protect them from injury.”

System tests with the initial energy absorbing strut concept will be
conducted through June at the gantry test facility at NASA Langley.
Additional tests will be conducted in the future to improve overall system
performance. Future testing will include alternate energy absorbing
designs, flight-like crew seats and instrumented crash test dummies.

To view a high-resolution image of the full-scale test article, visit:
www.nasa.gov/centers/langley/multimedia/iotw-cias.html