By SpaceRef Editor
February 6, 2015
Filed under NASA HQ, US 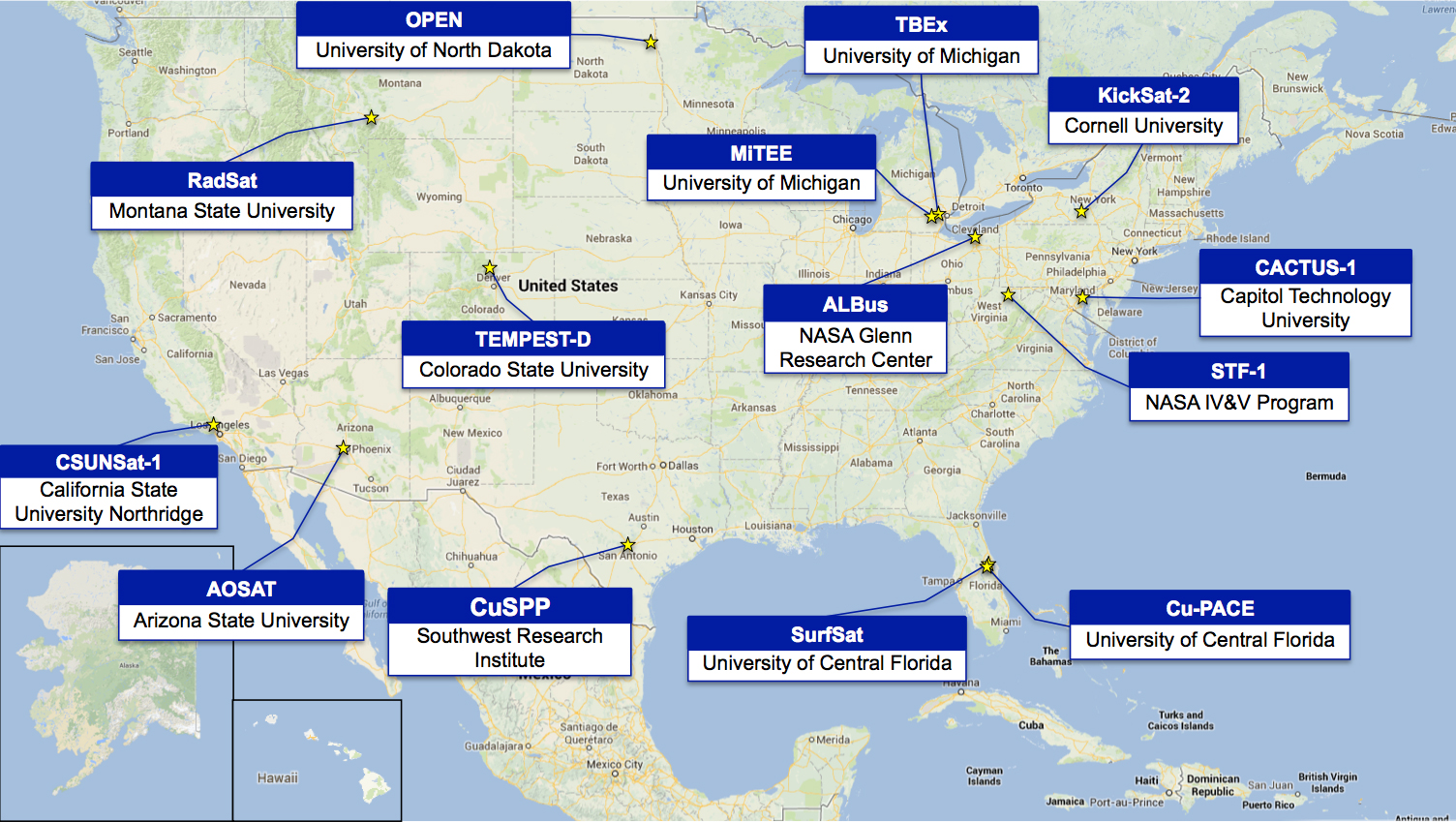 NASA has selected 14 small satellites from 12 states to fly as auxiliary payloads aboard rockets planned to launch in 2016, 2017 and 2018. The proposed CubeSats come from universities across the country, non-profit organizations and NASA field centers.

CubeSats are a class of research spacecraft called nanosatellites. The cube-shaped satellites measure about four inches on each side, have a volume of about one quart and weigh less than three pounds each.

The selections are part of the sixth round of the agency’s CubeSat Launch Initiative. After launch, the satellites will conduct technology demonstration, educational research or science missions. The selected spacecraft are eligible for placement on a launch manifest after final negotiations, depending on the availability of a flight opportunity. The organizations sponsoring satellites are:

Asteroid Origins Satellite is a science laboratory that will be the world’s first CubeSat centrifuge. It will enable a unique set of science and technology experiments to be performed on a CubeSat to answer fundamental questions of how the solar system formed and understand the surface dynamics of asteroids and comets.

The mission of California State University Northridge Satellite is to test an innovative low temperature capable energy storage system in space developed by NASA’s Jet Propulsion Laboratory in Pasadena that will enable future missions, especially those in deep space to do more science while requiring less energy, mass and volume.

The Coordinated Applied Capitol Technology University Satellite (CACTUS-1) is a technological demonstration of a cost-saving communications and commanding innovation. The payload will lower investment in communications and ground systems technology by licensing conventional internet satellite providers for low earth orbit use. The CubeSat’s aerogel-based Particle Capture and Measurement instrument is the first CubeSat-based orbital debris detector to be flown in low-Earth orbit.

The Temporal Experiment for Storms and Tropical Systems – Demonstrator (TEMPEST-D) provides risk mitigation for the TEMPEST mission that will provide the first temporal observations of cloud and precipitation processes on a global scale. These observations are important to understand the linkages in and between Earth’s water and energy balance, as well as to improve our understanding of cloud model microphysical processes that are vital to climate change prediction.

KickSat-2 is a CubeSat technology demonstration mission designed to demonstrate the deployment and operation of prototype Sprite “ChipSats” (femtosatellites). The Sprite is a tiny spacecraft that includes power, sensor and communication systems on a printed circuit board measuring 3.5 by 3.5 centimeters with a thickness of a few millimeters and a mass of a few grams. ChipSats could enable new kinds of science and exploration missions, as well as dramatically lower the cost of access to space.

In partnership with the University of West Virginia, the Simulation-to-Flight 1 (STF-1) mission will demonstrate the utility of the NASA Operational Simulator technologies across the CubeSat development cycle, from concept planning to mission operations. It will demonstrate a highly portable simulation and test platform that allows seamless transition of mission development artifacts to flight products.

The CubeSat mission to study Solar Particles over the Earth’s Poles (CuSPP) mission is space weather mission that will study the sources and acceleration mechanisms of solar and interplanetary particles near-Earth orbit. It will study magnetospheric ion precipitation in the high-latitude ionosphere.  It will increase the technology readiness level of a supra-thermal ion spectrograph concept so that it may fly with reduced risk and cost on future heliophysics missions.

The CubeSat Particle Aggregation and Collision Experiment (Cu-PACE) will perform a long-duration microgravity experiments in orbit to observe novel low-speed collisions in greater numbers than possible in ground-based, parabolic and suborbital flight experiments.

SurfSat is a science investigation that will measure plasma-induced surface charging and electrostatic discharge measurements. It will take in-situ measurements of the ground current waveforms from chosen common spacecraft dielectric material samples, measure the spacecraft and material potentials and will use a Langmuir probe system to measure the ambient plasma environment.

The Tandem Beacon Experiment (TBEx) will consist of a tandem pair of CubeSats, each carrying tri-frequency radio beacons, in near identical, low inclination orbits and a cluster of diagnostic sensors on five islands in the Central Pacific sector. The science objectives and goals of TBEx are to study how the dynamics and processes in the troposphere can act to cause variability in the behavior of the upper atmosphere and ionosphere.

The Open Prototype for Educational NanoSats (OPEN) mission aims to reduce mission risk and cost for universities, researchers and other spacecraft developers through the creation of an open-hardware/open-source software framework for CubeSat development. The designs use low-cost commercial off-the-shelf parts and easily-to-fabricate printed circuit boards that can be made using the budget of $5,000 in parts for a basic spacecraft.

As part of the White House Maker Initiative, NASA is seeking to leverage the growing community of space-enthusiasts to create a nation that contributes to NASA’s space exploration goals. In the first step to broaden this successful initiative to launch 50 small satellites from all 50 states in the next five years, the agency has made a selection from West Virginia, one of the 21 “rookie states” that have not previously been selected by the CubeSat Launch Initiative.

In the previous five rounds of the CubeSat Launch Initiative, 114 CubeSats from 29 states were selected. To date, 36 CubeSats have launched through the initiative as part of the agency’s Launch Services Program’s Educational Launch of Nanosatellite (ELaNa) Program. This year, four separate ELaNa missions will carry seven CubeSats.