NASA and NOAA’s latest Geostationary Operational Environmental Satellite, GOES-15, has successfully completed five months of on-orbit testing and has been accepted into service. The satellite has demonstrated operational readiness of its subsystems, spacecraft instruments and communications services. GOES-15 is the third and final spacecraft in the GOES N-P Series of geostationary environmental weather satellites.

The GOES fleet help NOAA forecasters track life-threatening weather and solar activity that can impact the satellite-based electronics and communications industry. During the checkout period, GOES-15 delivered high-resolution images from space, including the first visible and infrared images of Earth taken by its imager instrument, and the first image of the sun taken by its solar X-ray imager instrument.

“NASA is ecstatic that we were able to deliver on our promise to provide NOAA and this Nation with three geosynchronous weather satellites,” said Andre Dress, GOES Deputy Project Manager at NASA’s Goddard Space Flight Center, Greenbelt, Md. “From the very beginning, we set the bar high and we have attained all our goals. It is something that NASA and its contractors (Boeing Space & Intelligence Systems, Lockheed Martin, ITT and United Launch Alliance) can be very proud of.” 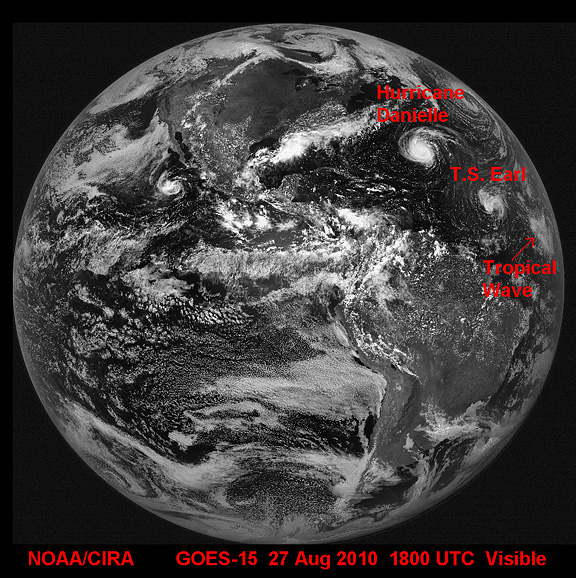 NOAA operates GOES-13 in the east and GOES-11 in the west — both provide weather observations covering more than 50 percent of the Earth’s surface. The GOES-15 spacecraft, designed and built by Boeing Space and Intelligence Systems, will be placed in an on-orbit storage location at 105 degrees west longitude should one of the operational GOES satellites degrade or exhaust their fuel. It will share a parking space with GOES-14, currently in the same storage orbit. Both satellites can be made operational within 24 hours to replace an older satellite.

“With more than 35 million Americans living in hurricane-prone areas, we need the reliable, accurate data GOES provide,” said Gary Davis, director of the Office of Systems Development at NOAA’s Satellite and Information Service.

A six-minute view of the 2009 Atlantic hurricane season as seen from space by GOES-12, formerly the East Coast GOES sentinel, is available online. The video highlights NASA technology and NOAA satellite data.

NOAA manages the GOES program, establishes requirements, provides all funding and distributes environmental satellite data for the United States. NASA Goddard procures and manages the design, development and launch of the satellites for NOAA on a cost reimbursable basis.
For more information about the GOES-15 mission and program on the Web, visit:

For information about NASA and agency programs on the Web, visit: http://www.nasa.gov/home