NASA And NOAA Mark 50 Years Of Weather Watching From Space

WASHINGTON — Fifty years ago, the world’s first weather satellite lifted off from Cape Canaveral, Fla., opening a new and exciting dimension in weather forecasting. Leaders from NASA and the National Oceanic and Atmospheric Administration, or NOAA, hailed the milestone as an example of a strong agency partnership and commitment to flying the best Earth observation satellites today and in the future.

The first image from the Television Infrared Observation Satellite, known as TIROS-1, was a fuzzy picture of thick bands and clusters of clouds over America. An image captured a few days later revealed a typhoon approximately 1,000 miles east of Australia. TIROS-1, a polar-orbiting satellite, weighed 270 pounds and carried two cameras and two video recorders.

“TIROS-1 started the satellite observations and interagency collaborations that produced vast improvements in weather forecasts, which have strengthened the nation,” said NASA Administrator Charles Bolden. “It also laid the foundation for our current global view of Earth that underlies all of climate research and the field of Earth system science.”

“This satellite forever changed weather forecasting,” said Jane Lubchenco, undersecretary of commerce for oceans and atmosphere and NOAA administrator. “Since TIROS-1, meteorologists have far greater information about severe weather and can issue more accurate forecasts and warnings that save lives and protect property.” 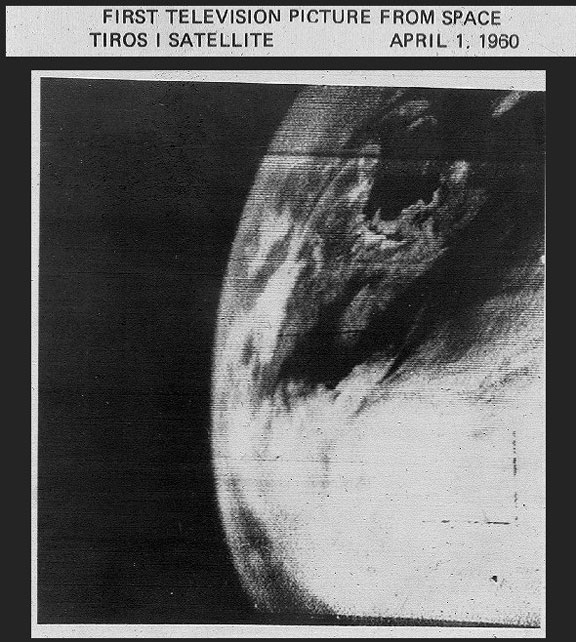 NASA launched all 10 of the TIROS satellites. Throughout the 1960s, each satellite carried increasingly advanced instruments and technology. By 1965, meteorologists combined 450 TIROS images into the first global view of the world’s weather, picking up a line of clouds over the Pacific Ocean barreling toward the United States.

“We could not provide skillful hurricane forecasts without the crucial imagery and data from geostationary and polar-orbiting satellites,” said Chris Landsea, the science operations officer at NOAA’s National Hurricane Center in Miami. “Before satellites, tropical storms and hurricanes were often missed if they stayed out over the open ocean. Now we know tropical storms and hurricanes have swings in numbers from decade to decade.”

With continued technological improvements, the satellites gave scientists the ability to track changes in climate, from the subtle onset of drought and its impact on vegetation to monitoring global sea-surface temperatures that signal atmospheric phenomena, such as El Nino and La Nina.

On Feb. 6, 2009, NASA launched the last of the TIROS satellites, NOAA N-Prime, from Vandenberg Air Force Base in California. Now called NOAA-19, the satellite provides coverage for the afternoon orbit, while the morning orbit is handled by a European satellite through a partnership with NOAA and the European Organisation for the Exploitation of Meteorological Satellites.

On Feb. 1, 2010, the White House restructured the National Polar-orbiting Operational Environmental Satellite System, or NPOESS, tri-agency effort among NOAA, NASA and the Department of Defense. Through the NOAA-NASA partnership, another polar-orbiting satellite called the NPOESS Preparatory Project is scheduled to launch in late 2011. It will demonstrate the capabilities of next-generation sensors and provide continuity with NASA’s Earth Observing System satellites. The NOAA-NASA team also will build, launch and operate two more polar satellites under the Joint Polar Satellite System. The satellites are planned to be ready for launch in 2015 and 2018.

NOAA and NASA also are working to launch the next generation GOES-R series of satellites, beginning in 2015. These spacecraft will have twice the clarity of today’s GOES and provide more than 20 times the information.

For more information about the TIROS program, visit: http://nasascience.nasa.gov/missions/tiros