NASA and Google Launch Virtual Exploration of the Moon

Forty years ago on July 20, 1969, the world watched as the crew of Apollo 11 took the first steps on the surface of the moon.

To celebrate this historic occasion, NASA and Google announced the launch of the Moon in Google Earth, an interactive, 3D atlas of the moon, viewable with Google Earth 5.0.

The announcement was made during a press conference at the Newseum in Washington, featuring remarks by Apollo 11 astronaut Buzz Aldrin; Alan Eustace, a Google senior vice president; Andrew Chaikin, author and space historian; and Anousheh Ansari, the first female space tourist.

Whether rediscovering iconic moments from the history of lunar exploration, or learning about them for the first time, the Moon in Google Earth enables users to better understand the moon and mankind’s relationship to it using an immersive, 3D experience.

“Today’s announcement builds on the ongoing relationship with Google that Ames Research Center initiated in November 2006, when we signed a Space Act Agreement to foster collaboration with our Silicon Valley neighbor,” said S. Pete Worden, director of NASA’s Ames Research Center at Moffett Field, Calif. “We’re excited to be a part of this latest chapter in Google’s efforts to bring virtual exploration of the moon to anyone with a computer.” 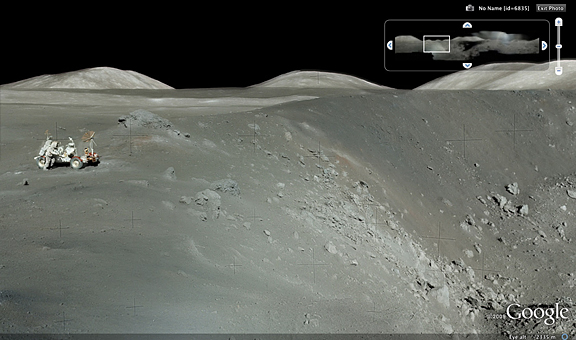 In addition to satellite imagery and topographical data, the following layers can be explored:

* Featured Satellite Imagery – Explore overlaid satellite imagery and detailed descriptions of selected areas on the moon from Arizona State University’s “Lunar Image of the Week.”
* Spacecraft Imagery – View selected imagery captured by the Apollo Metric Camera, and the Clementine and the Lunar Orbiter spacecraft.
* Apollo Missions – Travel back to the Apollo era and discover the landing sites of Apollo missions 11-17. Explore “street view” style panoramic images, watch previously unreleased footage from spacecraft films and read about the places astronauts saw on their trips to the moon.
* Guided Tours – Take a narrated tour of the moon with Apollo astronauts Buzz Aldrin (Apollo 11) and Jack Schmitt (Apollo 17)
* Historic Maps – Explore Apollo-era geologic and topographic maps of the moon.
* Human Artifacts – Learn about the various types of exploratory equipment that humans have left on the moon and where those objects can be found today.

To learn more about Moon in Google Earth, visit: earth.google.com

The Moon in Google Earth was jointly developed by Google, the NASA Ames Intelligent Robotics Group, and the SETI Institute as part of NASA’s Planetary Content project.

Data sets for the Moon in Google Earth were developed with the assistance of the United States Geologic Survey (USGS), Arizona State University and the Lunar and Planetary Institute. The Japan Aerospace Exploration Agency provided terrain data from the Kaguya orbiter. The initial release does not contain any imagery from the Lunar Reconnaissance Orbiter.

For more information about NASA’s plans to return to the moon and explore beyond, visit: http://exploration.nasa.gov