NASA and the Department of Energy have completed tests on several fission surface power components within the last few weeks. The agencies are researching technologies that could enable possible use of nuclear power on the surface of the moon and Mars. Nuclear power is part of the range of options that are being examined for potential human missions on the moon and Mars.

A fission surface power system could use a small nuclear reactor, about the size of an office trash can, and Stirling power generators to produce 40 kilowatts of energy, enough electricity to power a future lunar or Mars outpost. The electricity produced could be used for life support, performing experiments, recharging rovers and mining resources.

One successful test occurred at Glenn in Cleveland, where a lightweight composite radiator panel was successfully tested in a vacuum chamber that replicates the hard vacuum and extreme cold temperatures that would be seen in space, with temperatures as low as minus 125 degrees C. The radiator, approximately 6 feet by 9 feet, represents one of 20 panels that would be needed to cool the notional fission surface power system. By performing this test, the team showed the radiator panel could reject the required heat at the proper temperature under realistic lunar conditions.

According to Glenn lead engineer David Ellis, “This was a tremendous accomplishment and a giant step toward proving out the radiator technology. We can now proceed toward a system-level technology demonstration with confidence.”

A second achievement occurred at NASA’s Marshall Space Flight Center, Huntsville, Ala. For the first time, Stirling engines were heated with a pumped liquid metal, replicating how heat could be delivered from a reactor to the converter. This was a major accomplishment on the road to demonstrating technical feasibility of fission surface power. 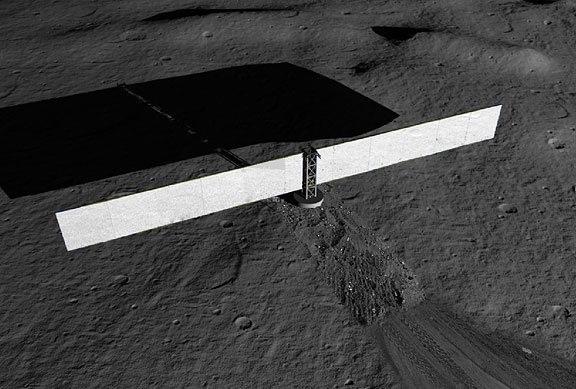 Steve Geng was the Glenn lead for the test. He said, “The engines performed flawlessly producing over 2 kilowatts of electricity at a gross thermal efficiency of about 32 per cent with liquid metal temperatures as high as 550 degrees C.”

At Sandia National Laboratories in Albuquerque, NM, a Stirling alternator was operated while being exposed to radiation levels similar to those that would be experienced with a reactor. The alternator survived a cumulative radiation dose 20 times the current fission surface power surface design requirement, during 26 hours of radiation exposure in the DOE Gamma Irradiation Facility at Sandia. There was no change in electrical power input required to maintain alternator operation, which would have been a possible indication of radiation damage.

The Stirling alternator was developed by Sunpower, Inc., Athens, Ohio. The diagnostics and control rack was assembled by Glenn. Testing was conducted by a team that included Sandia, Glenn and a University of Florida doctoral student.

“The pace of progress exhibited by these three achievements in the same time period is exciting,” said Lee Mason, Glenn’s principal investigator for the fission surface power project. “It has built the team’s confidence and prepared them for challenges that lay ahead.”

The next major step is a non-nuclear system level technology demonstration where all of the major elements will be combined in one test. This test is scheduled to begin in 2012.

Under the NASA Exploration Technology Development Program (ETDP) and in partnership with the Department of Energy (DOE), NASA has embarked on a project to develop Fission Surface Power (FSP) technology. A primary project goal is to develop viable FSP system options by 2013 to support an expected NASA decision to develop flight power systems for lunar outposts and later missions to Mars. The main FSP project objectives are as follows: 1) Develop FSP concepts that meet expected surface power requirements at reasonable cost with added benefits over other options. 2) Establish a hardware-based technical foundation for FSP design concepts and reduce overall development risk. 3) Reduce the cost uncertainties for FSP and establish greater credibility for flight system cost estimates. 4) Generate the key products to allow Agency decision-makers to consider FSP as a preferred option for flight development.

In order to achieve these goals, the FSP project has two main thrusts: Concept Definition and Risk Reduction. Under Concept Definition, NASA and DOE are performing trade studies, defining requirements, developing analytical tools, and formulating system concepts. A typical FSP system consists of the reactor, shield, power conversion, heat rejection, and power conditioning and distribution (PCAD). Studies are performed to identify the desired design parameters for each subsystem that allow the system to meet the requirements with reasonable cost and development risk. Risk Reduction provides the means to evaluate technologies in a laboratory test environment. Non-nuclear hardware prototypes are built and operated to verify performance expectations and resolve design uncertainties. 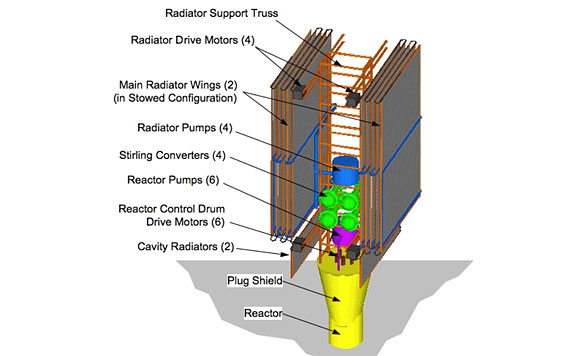 The Concept Definition and Risk Reduction activities are highly coupled and the products are staggered so that the results of one can influence the other. For example, data from an electromagnetic pump test could be used to anchor a reactor thermal-hydraulic code that is used to design the flight primary heat transport circuit. That design could then be used to form the basis for a higher fidelity ground test loop.

The FSP Project is managed by Glenn Research Center (GRC) in Cleveland, OH. GRC is also responsible for power conversion, heat rejection, and PCAD development, referred to as the balance-of-plant. Marshall Space Flight Center (MSFC) in Huntsville, AL provides expertise in reactor simulation, primary loop components and non-nuclear testing. The DOE is represented by four National Labs: Idaho, Los Alamos, Oak Ridge, and Sandia. Each brings unique capabilities to the team. Some of the key contributions of the DOE Labs are in the areas of reactor and shield design, modeling and tools, fuel development, instrumentation and control, materials and irradiation testing, heat exchangers, and pumps. Various industry partners and university participants also play key roles in the technology development.

Nuclear power systems are best suited for surface missions requiring high power in difficult environments where sunlight is limited and reliability is paramount. These are the conditions that are anticipated for future human missions to the moon and Mars. Power levels to sustain a crew of four and provide for operations are estimated to be in the 10’s of kilowatts. The moon’s 29.5 day rotational period results in a long, cold, lunar night of 354 hours. On Mars, the night period is only 12 hours but sunlight at the surface is reduced to about 20% that of the moon. Martian dust storms and missions to the higher latitudes, further decrease the availability of sunlight for solar power. On either surface, crew members would be highly dependent on the power system to achieve mission objectives and assure human safety.

A key advantage of FSP systems is that they produce constant power to allow continuous day and night surface operations. In fact, nuclear systems are likely to produce higher power during the night, due to the colder thermal sink, when heating and lighting requirements are greatest. Relative to comparable solar power systems with energy storage, FSP offers significant mass and volume savings. Based on recent NASA studies, the cost of nuclear power systems is also competitive with these solar-based power systems.

Nuclear system designs can be highly flexible and operationally robust. By burying the reactor in the local terrain, the system could be located close to the habitation area with minimal radiation concerns. If desired, the system could include on-board shielding for above-grade installation and high-voltage cabling to permit remote siting. The FSP system could even provide process heat for in situ resource utilization (ISRU) plants and habitats. Operational robustness would be achieved through multi-fault tolerant design architectures and long-life components, requiring no maintenance. Concept Definition Studies

While a flight FSP system would be the ultimate goal, technology development must proceed first. And in order to identify key technologies, suitable concepts must be defined. Concept design activities are focusing on affordable approaches to FSP. The main emphasis is on mature reactor technologies that have terrestrial design basis. Current plans presume the use of fast-spectrum, uranium dioxide (UO2) fuel pins with stainless steel cladding and structure. This limits operating temperatures to about 900 K. The preferred heat transport medium is liquid metal, either sodium (Na) or a sodium-potassium (NaK) mixture. The relatively low reactor temperature and the desire to minimize reactor thermal power requires efficient power conversion. Both Stirling and Brayton cycle heat engines offer high efficiency at cold-end temperatures that are practical for the lunar and Martian environments. The present heat rejection approach includes a pumped water cooling system and composite radiator panels with embedded heat pipes operating at about 375 K. The current PCAD implementation assumes the AC alternator power is delivered to an outpost power distribution node where it is converted to DC for the loads.

In order to satisfy a multitude of possible missions, NASA and DOE have developed a modular design concept. A single FSP unit could provide a net power of 40 kWe with a design life of 8 years, for missions as early as 2020. The unit size provides sufficient power margin for the initial mission phases, and permits the use of relatively near-term, low-risk component technologies. As power needs increase, or if a new location is desired, follow-on units could be delivered. The concept is extensible to Mars, with materials and design strategies that are fully compatible with the Martian environment.

Early risk reduction efforts are focused on demonstrating component technologies under expected FSP conditions, using modified commercial hardware. At MSFC, testing has begun on an annular linear induction pump (ALIP) that was formerly developed for the Experimental Breeder Reactor-II (EBR-II). Idaho National Lab removed the pump from storage and refurbished it for use in MSFC’s NaK primary test circuit. Test data will be used to design a new, improved ALIP. At GRC, a pair of open-cycle commercial Brayton micro-turbines were modified and assembled into a dual, closed-Braytoncycle power system to produce upwards of 30 kWe. A pair of commercial, 1 kWe free-piston Stirling power units are currently being modified at GRC with a NaK hot-end heat exchanger for testing at MSFC in late 2008. GRC has also tested several heat pipe radiator prototypes that will serve as a point-of-departure for a full-scale Radiator Demonstration Unit planned for thermal-vacuum testing in 2009.

The centerpiece of the risk reduction activities is the nonnuclear Technology Demonstration Unit (TDU) planned for completion in 2012. The goal of the TDU is to assemble the major components of the FSP system (heat source, power conversion, heat rejection, and PCAD) and conduct nonnuclear, integrated system testing in thermal-vacuum to evaluate overall performance. Plans are to develop full-scale components and assemble a 1/4th power (10 to 12 kWe) system in GRC’s Vacuum Facility #6. DOE and MSFC will jointly develop the reactor simulator. GRC and its industrial partners will develop the balance-of-plant. The testing will help to verify performance projections, develop safe and reliable control methods, and gain valuable systems operating experience while providing a tangible and measurable technology milestone.