By SpaceRef Editor
May 21, 2012
Filed under Ames Research Center, Commerce, US 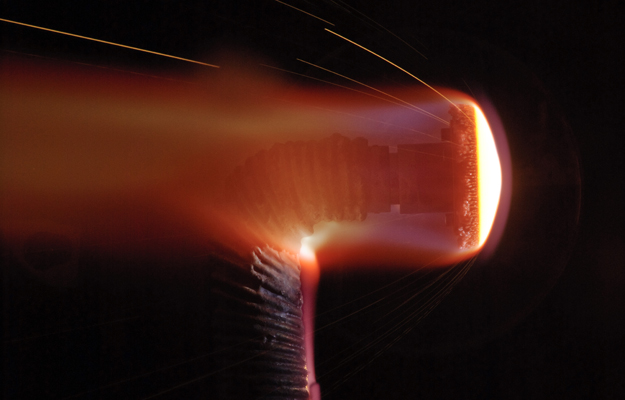 “For four decades, whenever the U.S. government or aerospace industry needed thermal protection capabilities for space flight missions, Ames delivered the technology developments that enabled those missions to go forward,” said Chuck Smith, chief of the Entry Systems and Technology Division at Ames. “Our work plays a key role in both government and industry space flight endeavors.”

The successful re-entry in late May or early June of the cutting-edge Dragon spacecraft from its demonstration flight to the International Space Station will be enabled in part by thermal protection system (TPS) technologies developed, tested and flight-qualified at Ames. Developed by Space Exploration Technologies Corp.’s (SpaceX), Hawthorne, Calif., the capsule will be launched into space atop a Falcon 9 rocket also built by SpaceX, from Space Launch Complex 40 at Cape Canaveral Air Force Station in Florida.

“We wouldn’t be here without the help of NASA – the core technologies developed by NASA have made this day possible,” said Elon Musk after the successful demonstration flight of the Falcon 9 launch vehicle and re-entry splashdown of the Dragon capsule in December 2010. “The performance of the heat shield was spectacular. In an exercise of caution, we designed the heat shield to not just handle Earth orbit re-entry, but to actually be able to handle a worst-case, off-nominal lunar and Mars re-entry, so it’s an extremely capable heat shield and opens up a lot of possibilities.”

The spacecraft does not have a crew, but carries about 1,200 pounds of cargo that the astronauts and cosmonauts living on the station will be able to use. Because the mission is a test flight, the cargo is not material deemed critical to the crew.

Unlike any other cargo carrier, the Dragon is designed to bring things back to Earth, a boon for scientists whose research is taking place on the orbiting laboratory. In order to safely return the Dragon to Earth, SpaceX chose to incorporate the Ames-developed Phenolic Impregnated Carbon Ablator (PICA) thermal protection material into their heat shield design for the Dragon capsule. PICA is a heat shield material slightly more dense than balsa wood that is designed to protect spacecraft during their fiery re-entry into Earth’s atmosphere. For example, NASA applied PICA on the Stardust sample return capsule, which brought back to Earth the first comet particles and interstellar dust samples in January 2006. Stardust holds the record for the fastest Earth re-entry speed of any human-made object.

To apply this innovative heat shield technology, SpaceX engineers worked with Dan Rasky – an original developer of the material, senior scientist and director of the Emerging Commercial Space Office at Ames – along with other thermal protection materials researchers and scientists at Ames.

“When people get serious about entry systems design, they come to Ames for the capabilities, experience and unique facilities needed to do that work,” said Rasky. “They understand the future of heat shields is taking place in the here-and-now.”

This forged a public-private partnership NASA envisioned as a key component to achieve the agency’s mission to closely collaborate with Commercial Orbital Transportation Services (COTS) partners. A team at Ames performed the initial design analysis for the Dragon thermal protection system using Ames-developed tools, including the Arc Jet Complex that is used to simulate the in-flight hot gas flow environments the spacecraft experiences during re-entry.

The PICA-based version of the heat shield material developed by SpaceX, is called PICA-X. PICA-X protects the spacecraft’s structure during the intense heating environment experienced during re-entry. These samples were tested in the arc jets at Ames in order to understand the material’s response to re-entry conditions. Engineers at Ames conducted two series of thermal protection system material testing for PICA-X in December 2008 and June 2011. During the tests, the surface temperature on the PICA-X samples reached approximately 3,450 degrees Fahrenheit – almost twice as hot as lava.

The PICA-X system is passive, meaning it’s not load bearing, and it protects the vehicle by absorbing heat and re-radiating it out into space, helping the spacecraft maintain its shape and structural integrity. On the other hand, active systems keep heat away from the vehicle’s structure by partially burning or charring it, which changes the vehicle’s shape in the process.

“We have an outstanding team who were thrilled to have the opportunity to work with industry, because it helps us expand our portfolio of capabilities, while gaining new insights into emerging technology challenges,” said Mary Livingston, chief of the Systems Analysis Branch in the Flight Vehicle Research and Technology Division at Ames. “Eventually we transferred some of those capabilities to SpaceX so they could perform subsequent design iterations.”

The Dragon is expected to become operational and launch regular supply runs to the space station. To further take advantage of private-public partnership opportunities like the one between NASA and SpaceX, Rasky believes it is vital for NASA to return to the model established by the National Advisory Committee for Aeronautics (NACA), created by Congress in 1915 to support the fledgling aviation industry. In 1958, when the nation’s focus turned towards space, NACA was renamed the National Aeronautics and Space Administration (NASA).

“By providing the kind of support for the emerging commercial space industry that NACA provided for the aviation industry, both NASA and industry will benefit,” observed Rasky. “Our commercial partners will gain access to the deep knowledge and unique testing facilities developed at NASA over the last 50 years, and NASA can gain insight into the flexible work processes used by entrepreneurial firms to better support the innovative work going on inside the agency.”

As for other ongoing NASA space endeavors, heat shield researchers at Ames continue to pioneer the development of technologies to enable future missions. In August 2012, PICA will help NASA’s Mars Science Laboratory mission and Curiosity rover land safely on Mars.

“As we did with PICA, today we are engaged in developing innovative new thermal protection systems to enable future space missions by making our public and private partners’ human and robotic missions more robust, safer and a lot cheaper,” said Ethiraj Venkatapathy, chief technologist for the Entry Systems and Technology Division at Ames.