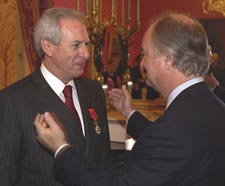 In
ceremonies last night in Washington, NASA Administrator Daniel S. Goldin
was awarded one of France’s highest and most distinguished honors, the
“Officer of the Legion of Honor.”

Administrator Goldin
was recognized for his contributions to the development and broadening
of American-French civil space cooperation. The Administrator was presented
with the award by the Ambassador of France, His Excellency Francois Bujon
de l’Estang, at a ceremony at the French Ambassador’s residence.

“It is a rare and
distinct privilege to be included among the many illustrious individuals
throughout history who have been granted this prestigious award, and I
am very honored,” stated Administrator Goldin. 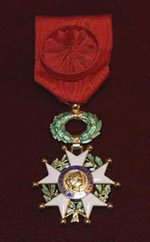 “The
award’s genesis is rooted in a period of French history when its explorers
were boldly expanding the frontiers of the New World,” the Administrator
continued. “Today, the French people are building on that legacy of exploration
by helping NASA and our other strategic partners boldly expand the frontier
of space with the International Space Station.

In addition, NASA
is working with the French space agency (CNES) in areas such as Mars exploration,
Earth observation and the flight of French astronauts aboard the Space
Shuttle, all of which are testimony to a vigorous and robust cooperative
program between the two agencies.”

Napoleon created the
Legion of Honor in 1802 to reward military and civil merits in the service
of France.

From the beginning,
the honor has been conferred on eminent persons in all walks of life –
members of the military, magistrates, administrators and civil servants
as well as people of distinguished achievements in the arts, fine arts,
teaching, agriculture, trade and industry.

Today, the Legion
of Honor is awarded to French citizens as well as non-French individuals
to recognize outstanding contributions to humankind.