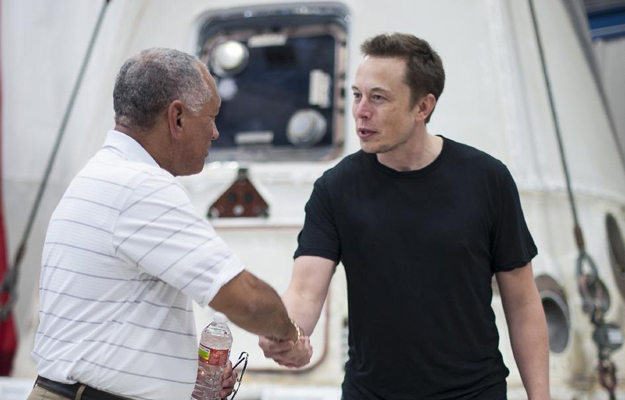 Bolden and Musk also thanked the more than 150 SpaceX employees working at the McGregor facility for their role in the historic mission. SpaceX’s Dragon capsule made history May 31 when it returned to Earth after delivering supplies to the space station.

“The Dragon capsule is a tangible example of the new era of exploration unfolding right now,” NASA Administrator Charles Bolden said. “Commercial space is becoming a reality as SpaceX looks ahead to future missions to the space station and other destinations. All of NASA’s partners in the commercial crew and cargo programs continue to meet milestones designing the next generation of innovative U.S.

spacecraft destined for low Earth orbit. In addition, NASA centers across the country are making exciting progress on the vehicles that will take astronauts to farther destinations like an asteroid and Mars. I congratulate Elon Musk and the SpaceX team again for this historic milestone.”

While on-site, Bolden had the opportunity to view some of the 1,367 pounds of cargo the spacecraft returned to Earth from the space station. Dragon is the only spacecraft capable of returning a significant quantity of science experiments and cargo from the station. Experiments will be given back to researchers hoping to gain new insights provided by the station’s unique microgravity environment. The cargo was transferred to NASA June 13 and will be taken to the agency’s Johnson Space Center in Houston for further processing.

Dragon’s journey to the station was SpaceX’s second demonstration mission under NASA’s Commercial Orbital Transportation Services Program (COTS), which provides investments intended to lead to regular resupply missions to the International Space Station and stimulate the commercial space industry in the United States. The mission began May 22 as the capsule launched from Cape Canaveral Air Force Station in Florida aboard a SpaceX Falcon 9 rocket. After its maneuverability and abort systems were tested, crew members of Expedition 31 aboard the station grappled the capsule and berthed it to the orbiting laboratory.

Dragon, its exterior scorched by the heat of re-entry, splashed down in the Pacific Ocean May 31. SpaceX recovered the capsule immediately and transported it to McGregor, where engineers unloaded cargo and removed hazardous materials. Dragon will be shipped to SpaceX Headquarters in Hawthorne, Calif., later this year.

On Thursday, Bolden and Musk will be at SpaceX Headquarters and speak with reporters at 9 a.m. PDT. They will see the Dragon spacecraft that flew the first COTS demonstration mission in December 2010, during which SpaceX became the first private company to recover a spacecraft after it orbited Earth. They also will see a prototype Dragon spacecraft being designed to carry astronauts to the space station as part of NASA’s Commercial Crew Program.

Media representatives wishing to attend Thursday’s event should email [email protected] for information on access to the facilities.