Mysterious Dance of Dwarfs May Force a Cosmic Rethink

By SpaceRef Editor
July 20, 2014
Filed under University of Sydney, US 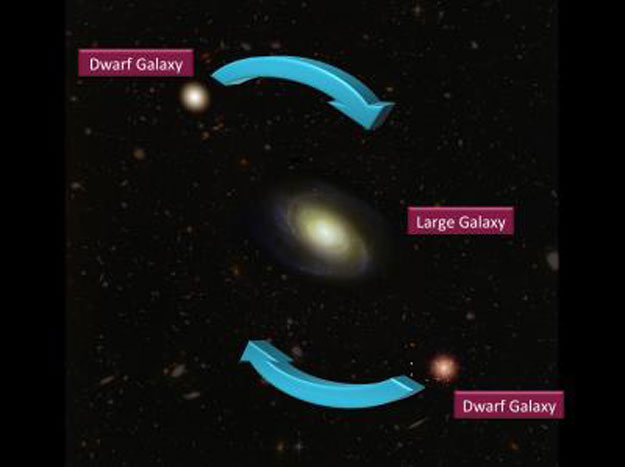 This is an artist’s impression of the coherent orbit of dwarf galaxies about a large galaxy. Credit: Credit Geraint Lewis. The Hubble Image Archive was used as a source of the galaxies used in this illustration.

The discovery that many small galaxies throughout the universe do not ‘swarm’ around larger ones like bees do but ‘dance’ in orderly disc-shaped orbits is a challenge to our understanding of how the universe formed and evolved.

The finding, by an international team of astronomers, including Professor Geraint Lewis from the University of Sydney’s School of Physics, has just been announced in Nature.

“Early in 2013 we announced our startling discovery that half of the dwarf galaxies surrounding the Andromeda Galaxy are orbiting it in an immense plane” said Professor Lewis. “This plane is more than a million light years in diameter, but is very thin, with a width of only 300 000 light years.”

The universe contains billions of galaxies. Some, such as the Milky Way, are immense, containing hundreds of billions of stars. Most galaxies, however, are dwarfs, much smaller and with only a few billion stars.

For decades astronomers have used computer models to predict how these dwarf galaxies should orbit large galaxies. They had always found that they should be scattered randomly.

“Our Andromeda discovery did not agree with expectations, and we felt compelled to explore if it was true of other galaxies throughout the universe,” said Professor Lewis.

Using the Sloan Digital Sky Survey, a remarkable resource of colour images and 3-D maps covering more than a third of the sky, the researchers dissected the properties of thousands of nearby galaxies.

“We were surprised to find that a large proportion of pairs of satellite galaxies have oppositely directed velocities if they are situated on opposite sides of their giant galaxy hosts”, said lead author Neil Ibata of the Lycée International in Strasbourg, France.

“Everywhere we looked we saw this strangely coherent coordinated motion of dwarf galaxies. From this we can extrapolate that these circular planes of dancing dwarfs are universal, seen in about 50 percent of galaxies,” said Professor Geraint Lewis.

“This is a big problem that contradicts our standard cosmological models. It challenges our understanding of how the universe works including the nature of dark matter.”

The researchers believe the answer may be hidden in some currently unknown physical process that governs how gas flows in the universe, although, as yet, there is no obvious mechanism that can guide dwarf galaxies into narrow planes.

Some experts, however, have made more radical suggestions, including bending and twisting the laws of gravity and motion. “Throwing out seemingly established laws of physics is unpalatable,” said Professor Lewis, “but if our observations of nature are pointing us in this direction, we have to keep an open mind. That’s what science is all about.”