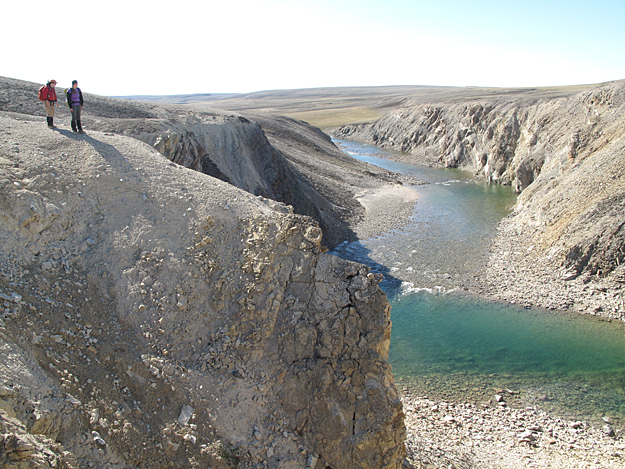 It might not be a giant leap for mankind just yet, but Western-led training in the Canadian Arctic may lead to the first steps for future international missions to the Moon or Mars. In order to prepare for those missions, Canadian Space Agency (CSA) astronaut Jeremy Hansen has joined Western planetary geologist Gordon ‘Oz’ Osinski and his research team in the Canadian Arctic until July 12 to investigate a possible new meteorite impact crater.

Follow along with the exploration at the official mission blog, where the first batch of photographs is posted currently.

Thanks to collaboration between the Canadian Space Agency and Western’s Centre for Planetary Science and Exploration, Hansen, Osinski and his Western research team are in the Canadian Arctic currently to investigate reports of a new suspected meteorite impact crater. Osinski, who has 13 Arctic field expeditions to his credit, is the NSERC/MDA/CSA Industrial Research Chair in Planetary Geology.

“This analogue mission is very much like what a real mission will be like. None of the team has ever been to this site and very little is known about this region of the Arctic,” Osinski said. “That said, we’re hoping to find definitive evidence that this crater is the result of a meteorite impact event and we’re also looking for any signs of possible ‘life after death’ colonizing it in the form of hydrothermal systems and lake sediments.”

In July 1971, astronauts Charles Duke and John Young prepared for their Apollo 16 mission to the Moon by carrying out field geology training in and around Sudbury, site of one of the world’s largest meteorite impact craters – the immense scar, boasting a diameter of approximately 200 kilometres, left by the collision of asteroid almost two billion years ago.

By studying the craters in Sudbury, the Apollo 16 astronauts were preparing themselves for what they could expect on the Moon.

Fast-forward more than half a century and the newest cadre of astronauts is studying planetary geology for the first time since the Apollo missions.

Among these off-world explorers is Hansen, a former Canadian Armed Forces fighter pilot who graduated from NASA Astronaut Candidate Training in 2011. Like Duke and Young, Hansen’s next small step before his giant leap is receiving hands-on field geology training on Victoria Island (or Kitlineq), a remote part of the Canadian Arctic.