By SpaceRef Editor
July 6, 2017
Filed under Commerce, Massachusetts Institute of Technology, US 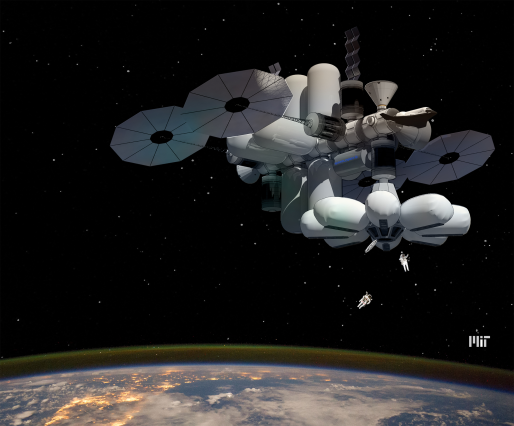 An interdisciplinary team of MIT graduate students representing five departments across the Institute was recently honored at NASA’s Revolutionary Aerospace Systems Concepts-Academic Linkage Design Competition Forum. The challenge involved designing a commercially enabled habitable module for use in low Earth orbit that would be extensible for future use as a Mars transit vehicle. The team’s design won first place in the competition’s graduate division.

The MIT project — the Managed, Reconfigurable, In-space Nodal Assembly (MARINA) — was designed as a commercially owned and operated space station, featuring a luxury hotel as the primary anchor tenant and NASA as a temporary co-anchor tenant for 10 years. NASA’s estimated recurring costs, $360 million per year, represent an order of magnitude reduction from the current costs of maintaining and operating the International Space Station. Potential savings are approximately 16 percent of NASA’s overall budget — or around $3 billion per year.

“Modularized service racks connect any point on MARINA to any other point via the extended IDSS interface. This enables companies of all sizes to provide products and services in space to other companies, based on terms determined by the open market,” Moraguez said. “Together these decisions provide scalability, reliability, and efficient technology development benefits to MARINA and NASA.”

MARINA’s design also enables modules to be reused to create an interplanetary Mars transit vehicle that can enter Mars’ orbit, refuel from locally produced methane fuel, and return to Earth.

MARINA and SERG team member George Lordos MBA ’00 is currently a graduate fellow in the MIT System Design and Management (SDM) Program, which is offered jointly by the MIT School of Engineering and the MIT Sloan School of Management. Lordos pointed out that MARINA’s engineering design innovations are critical enablers of its commercial viability, which rests on MARINA’s ability to give rise to a value-adding, competitive marketplace in low Earth orbit.

“Just like a yacht marina, MARINA can provide all essential services, including safe harbor, reliable power, clean water and air, and efficient logistics and maintenance,” said Lordos, who will enter the MIT aeronautics and astronautics doctoral program this fall. “This will facilitate design simplicity and savings in construction and operating costs of customer-owned modules. It will also incent customers to lease space inside and outside MARINA’s node modules and make MARINA a self-funded entity that is attractive to investors.”

Valentina Sumini, a postdoc at MIT, contributed to the architectural concept being used for MARINA and its space hotel, along with MARINA faculty advisor Assistant Professor Caitlin Mueller of MIT’s School of Architecture and Planning and Department of Civil and Environmental Engineering.