By SpaceRef Editor
April 17, 2001
Filed under Polar Research, UNIVERSITY OF COLORADO AT BOULDER, US


Known as aerosondes, the diminutive 30-pound planes are helping researchers monitor conditions like temperature, humidity and wind speed, said CU-Boulder aerospace engineering Professor Judith Curry. In addition, the tiny planes are packing digital cameras to assess changes in sea ice and coastal erosion that may be associated with Arctic warming. The flights started April 8 and run through April 20.


“We want to map the coastal sea ice changes with the cameras in order to document conditions in the spring before the ice breaks up,” said Curry. “We also are extremely interested in how potential climate change in the region might affect the native Inuit subsistence living, including fishing and whale hunting.”


Since the aerosondes have the ability to fly far out over the Arctic Ocean ñ a dangerous place for full-sized aircraft ñ they can collect hard-to-get meteorological data. They are able to collect real-time data on frigid air outbreaks over the Arctic, for example, that may be heading south and impacting weather of the continental United States, she said. 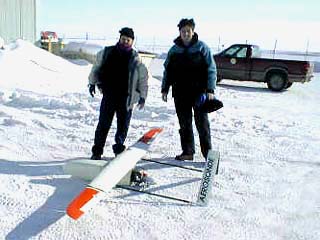 The aerosondes have the potential to be workhorses in the pole regions, said Curry. In 1998, an aerosonde ñ which can fly more than 1,500 miles on a gallon of fuel –completed the first unmanned flight across the North Atlantic Ocean.


“The planes could be used for a variety of purposes, including searching for changes in ice cover, monitoring for environmental hazards such as oil spills, surveying for coastal erosion, wildlife studies and other projects,” said James Maslanik. An associate professor for research in aerospace engineering and co-investigator on the aerosonde project, Maslanik is currently in Barrow directing aerosonde operations.


CU-Boulder students have been working for the past several years to improve the effectiveness of the three-foot-long planes, said Curry. Two of the planes vanished north of Barrow in 1999, apparently from wing icing.


One group of students has been testing ways to mitigate aerosonde wing icing by using various techniques in the “cold room” of Recreational Equipment Inc. in Denver, which dips below zero. Other students designed a new catapult launch system equipped with a rail in lieu of the previous launch system — sending the planes skyward from the tops of fast-moving ground vehicles.


In addition, students are using computer models to improve the stability of the aerosonde aircraft in order to stabilize sensitive instruments onboard.


Although the aerospace engineering department owns three of the $35,000 planes, they are used only for research and development on campus. The three planes now flying around the Arctic are leased from Aerosonde Robotic Aircraft, Inc. 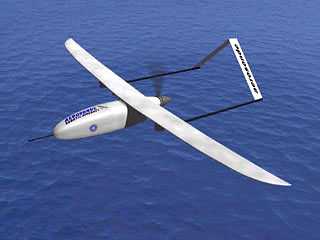 One of the key issues affecting humans on the North Slope is coastal erosion caused by storm surges, changes in permafrost, flooding and sea rise.


“This is an interdisciplinary project involving engineers, physical scientists and social scientists,” said Curry. “It is up to us to put together our data and translate it into something the people can understand and use to make decisions.”


Examples include providing data to coastal villagers on the location and movement of sea ice near villages, as well as long-term weather forecasts. “We need to educate them about the probabilities and uncertainies of events that could threaten their communities, then let them make decisions like moving barges or other structures and additional ways to mitigate potential problems from sea ice and bad weather.”


Future missions could include flights over Greenland, Antarctica and even into hurricanes and other atmospheric and meteorological hotspots around the globe, said Maslanik. CU-Boulderís aerosonde missions are expected to continue through 2006 with funding from the National Science Foundation.

University of Colorado at Boulder