Milky way churning out new stars at a furious pace

By SpaceRef Editor
May 28, 2004
Filed under Astrophysics, UNIVERSITY of WISCONSIN-MADISON, US

Some of the first data from a new orbiting infrared telescope are revealing that the Milky Way – and by analogy galaxies in general – is making new stars at a much more prolific pace than astronomers imagined.

The findings from NASA’s Spitzer Space Telescope were announced today (May 27) at a NASA headquarters press briefing by Edward Churchwell, a University of Wisconsin-Madison astronomer and the leader of a team conducting the most detailed survey to date of our galaxy in infrared light.

Focusing the telescope on a compact cluster of stars at the heart of a distant nebula known as RCW49, Churchwell and his colleagues discovered more than 300 newly forming stars. Each of the stars, known to astronomers as protostars, has a swirling disk of circumstellar dust and creates ideal conditions for the formation of new solar systems.

“In this one small area, we have a stellar nursery like no one has ever seen before,” says Churchwell, an expert on star formation. “The sheer number of objects is astounding, and may force us to rewrite our ideas of star formation and how much of it is going on in the Milky Way.

“I am dead sure there are many regions like this throughout the galaxy. It is not unique.”

For years, astronomers have probed objects like the nebula RCW49, a thick, obscuring cocoon of dust and gas, with radio telescopes. Listening in, they have learned that these hidden pockets of space are the places where most of the new stars that populate a galaxy are born.

With the Spitzer Space Telescope, astronomers can now look deep inside these regions to directly observe star formation: “We can peel away the dust layers to see what is going on and we’re seeing things in incredible detail. This telescope is almost perfectly tuned to study star formation and it will provide us with a huge database of protostars. And this is what makes galaxies tick, these areas of massive star formation,” Churchwell says.

Indeed, his team has been able to catalog not only a large number of protostars from this one small region of space, but also the spectrum of newborn stars’ various stages of early development.

“We’re finding stars at different points in their evolutionary history,” Churchwell explains. “We hope to be able to fill out the entire early evolutionary sequence of a star’s development.”

Of special interest to astronomers is the potential for protostars to form planetary systems. The stars are formed from large disks of cool dust and gas, known as accretion disks. The nascent stars grow as material spirals inward from the disk to the star. 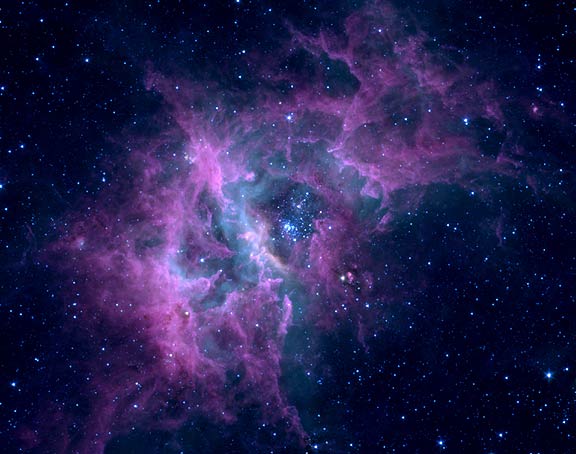 NOTE TO PHOTO EDITORS: A high-resolution image of the nebula is available at http://www.news.wisc.edu/newsphotos/nebula.html

The Great Observatory program, which also includes the Hubble Space Telescope, the Compton Gamma Ray Observatory and the Chandra X-ray Observatory, is designed to sample the cosmos across a wide portion of the electromagnetic spectrum.

The Spitzer Space Telescope was launched into an Earth-trailing heliocentric orbit in August of 2003.

Churchwell’s team, which uses the Infrared Array Camera, one of three scientific instruments aboard the telescope, is charged with creating an infrared mosaic of a swath of the inner Milky Way composed of 300,000 image frames of 1.2 second exposures each.

“We’re making a complete survey of the inner two-thirds of our galaxy,” Churchwell explains. “We can’t survey the very center of the galaxy because it is too bright and would swamp our detectors.”

When completed, the survey will provide a wealth of data from regions of space previously obscured by foreground clouds of dust and gas. There will be many more surprises, Churchwell says.

The data are being analyzed by a team of about 20 scientists in Madison and around the country who make up the GLIMPSE or Galactic Legacy Infrared Mid-Plain Survey Extraordinaire. The final data products will be archived and released to the astronomy community by the Spitzer Space Science Center in Pasadena, Calif.

Churchwell says the orbiting observatory is performing superbly. “From the perspective of the Infrared Array Camera, it’s almost picture perfect. The images are beautiful. It’s a real success story for NASA,” he says.

NOTE TO PHOTO EDITORS: A high-resolution image of the nebula is available at http://www.news.wisc.edu/newsphotos/nebula.html