By SpaceRef Editor
June 10, 2012
Filed under Astrobiology, Earth, UNIVERSITY OF COLORADO AT BOULDER, US 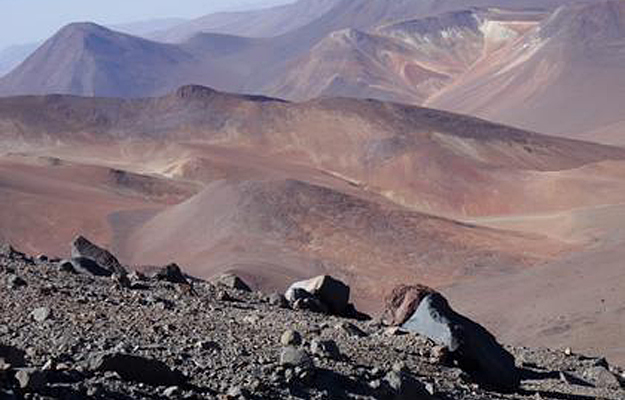 Image: A CU-Boulder-led team has discovered some rare, primitive microorganisms on high volcanoes in South America that may be fueled by drifting gases in the region rather than photosynthesis. (Image courtesy University of Colorado)

A team led by the University of Colorado Boulder looking for organisms that eke out a living in some of the most inhospitable soils on Earth has found a hardy few.

A new DNA analysis of rocky soils in the Martian-like landscape on some volcanoes in South America has revealed a handful of bacteria, fungi and other rudimentary organisms called archaea, which seem to have a different way of converting energy than their cousins elsewhere in the world.

Life gets little encouragement on the incredibly dry slopes of the tallest volcanoes in the Atacama region, where CU-Boulder Professor Steve Schmidt and his team collected soil samples. Much of the sparse snow that falls on the terrain sublimates back to the atmosphere soon after it hits the ground, and the soil is so depleted of nutrients that nitrogen levels in the scientists’ samples were below detection limits.

Ultraviolet radiation in the high-altitude environment can be twice as intense as in a low-elevation desert, said Schmidt of CU-Boulder’s ecology and evolutionary biology department. While the researchers were on site, temperatures dropped to 14 degrees Fahrenheit one night and spiked to 133 F the next day.

How the newfound organisms survive under such circumstances remains a mystery. Although Ryan, Schmidt and their colleagues looked for genes known to be involved in photosynthesis and peered into the cells using fluorescent techniques to look for chlorophyll, they couldn’t find evidence that the microbes were photosynthetic.

Instead, they think the microbes might slowly generate energy by means of chemical reactions that extract energy and carbon from wisps of gases such as carbon monoxide and dimethylsulfide that blow into the desolate mountain area. The process wouldn’t give the bugs a high-energy yield, Lynch said, but it could be enough as it adds up over time. A paper on the findings has been accepted by the Journal of Geophysical Research-Biogeosciences, published by the American Geophysical Union.

While normal soil has thousands of microbial species in just a gram of soil, and garden soils even more, remarkably few species have made their home in the barren Atacama mountain soil, the new research suggests. “To find a community dominated by less than 20 species is pretty amazing for a soil microbiologist,” Schmidt said.

He has studied sites in the Peruvian Andes where, four years after a glacier retreats, there are thriving, diverse microbe communities. But on these volcanoes on the Chile-Argentina border, which rise to altitudes of more than 19,685 feet and which have been ice-free for 48,000 years, the bacterial and fungal ecosystems have not undergone succession to more diverse communities. “It’s mostly due to the lack of water, we think,” he said. “Without water, you’re not going to develop a complex community.”

“Overall, there was a good bit lower diversity in the Atacama samples than you would find in most soils, including other mountainous mineral soils,” Lynch said. That makes the Atacama microbes very unusual, he added. They probably had to adapt to the extremely harsh environment, or may have evolved in different directions than similar organisms elsewhere due to long-term geographic isolation.

Growth on the mountain might be intermittent, Schmidt suggested, especially if soils only have water for a short time after snowfall. In those situations, there could be microbes that grow when it snows, then fall dormant, perhaps for years, before they grow again. High-elevation sites are great places to study simple microbial communities, ecosystems that haven’t evolved past the very basics of a few bacteria and fungi, Schmidt said.

“There are a lot of areas in the world that haven’t been studied from a microbial perspective, and this is one of the main ones,” he said. “We’re interested in discovering new forms of life, and describing what those organisms are doing, how they make a living.”

Schmidt’s lab, along with others, is studying how microorganisms travel from one site to another. One common method of microbe transport is through the air — they’re caught up in winds, sucked up into clouds, form rain droplets and then fall back to the ground somewhere else as precipitation.

But on mountains like Volcan Llullaillaco and Volcan Socompa, the high UV radiation and extreme temperatures make the landscape inhospitable to outside microbes. “This environment is so restrictive, most of those things that are raining down are killed immediately,” Schmidt said. “There’s a huge environmental filter here that’s keeping most of these things from growing.”

The next steps for the researchers are laboratory experiments using an incubator that can mimic the extreme temperature fluctuations to better understand how any organism can live in such an unfriendly environment. Studying the microbes and finding out how they can live at such an extreme can help set boundaries for life on Earth, Schmidt said, and tells scientists what life can stand. There’s a possibility that some of the extremophiles might utilize completely new forms of metabolism, converting energy in a novel way.

Schmidt also is working with astrobiologists to model what past conditions were like on Mars. With their rocky terrain, thin atmosphere and high radiation, the Atacama volcanoes are some of the most similar places on Earth to the Red Planet.

“If we know, on Earth, what the outer limits for life were, and they know what the paleoclimates on Mars were like, we may have a better idea of what could have lived there,” he said.