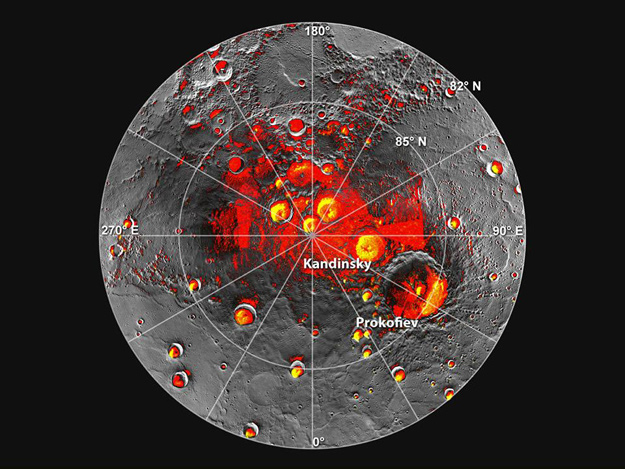 NASA’s MESSENGER spacecraft has identified large concentrations of hydrogen at Mercury’s north pole, thought to be in the form of water ice, researchers announced today.

“The material itself near the surface is practically pure water ice,” Feldman said. “The most likely explanation is that there was a big comet impact in the past 50 million years or so that delivered water. Some of that water found its way to the poles to become ice, and most that ice later became covered by about 20 centimeters of soil or some other material.

“If there is water ice, it says there is a delivery mechanism for water ice to all the planets, and it tells us something of the history of the solar system, and how water was delivered to the innermost planets,” Feldman said.

David J. Lawrence of The Johns Hopkins University Applied Physics Laboratory, who was lead author on the paper said, “The MESSENGER neutron results could not have been completed with out Bill’s and Tom’s help. Bill provided the brains behind the design of the MESSENGER Neutron Spectrometer, and he and APL engineer John Goldsten were the primary drivers for the design and building of the NS. Tom provided critical support for our analysis using custom simulation codes to calculate the fast neutron response of the MESSENGER NS, which provides key information about the stratigraphy of the hydrogen.”

MESSENGER’s Neutron Spectrometer maps variations in the intensity of neutrons in three broad energy ranges: fast, epithermal, and thermal, in order of decreasing neutron energy. Fast neutrons are made by the interaction of high-energy particles called galactic cosmic rays, which steadily bombard Mercury’s surface. Neutrons undergo collisions with nuclei in the surface, steadily losing energy, passing through the epithermal energy range and approaching thermal equilibrium with atoms in the near-surface. Some of these neutrons escape into space and are measured by MESSENGER’s Neutron Spectrometer. The neutron energy distribution conveys information about the composition of Mercury’s surface, including the abundance and layering of hydrogen.

PSI scientists are based in 18 states and the District of Columbia, Australia, Canada, Ireland, Latvia, Russia, South Africa, Switzerland and the United Kingdom.