Net earnings under IFRS for the second quarter of 2017 were $25.8 million, consistent with $25.3 million for the same period of last year. Net earnings this quarter were impacted by the inclusion and variability of certain large, non-operational items, including share-based compensation expense, restructuring costs, legal and other professional fees related to the acquisition of DigitalGlobe, Inc., and non-cash foreign exchange differences.

The Company has declared a quarterly dividend of $0.37 per common share payable on September 29, 2017 to shareholders of record at the close of business on September 15, 2017. 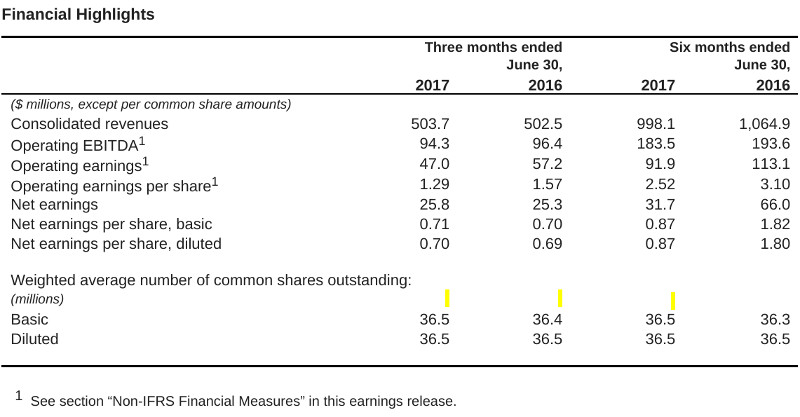 MDA’s condensed consolidated financial statements and management’s discussion and analysis (MD&A) for the three and six months ended June 30, 2017 are available at:
http://mdacorporation.com/corporate/investor/financial-reports

MDA’s business is focused on markets and customers with strong repeat business potential, primarily in the Communications sector and the Surveillance and Intelligence sector. In addition, the Company conducts a significant amount of advanced technology development.

MDA’s established global customer base is served by more than 4,800 employees operating from 15 locations in the United States, Canada, and internationally.

The Company’s common shares trade on the Toronto Stock Exchange under the symbol MDA.

MDA President and CEO Howard Lance and Executive Vice President and CFO Anil Wirasekara will host a Conference Call on Friday, July 28, 2017 at 6:00 a.m. Pacific (9:00 a.m. Eastern) to discuss the financial results and to answer questions.

The Conference Call will also be Webcast live at: