Massive Stars Are Born as Giants 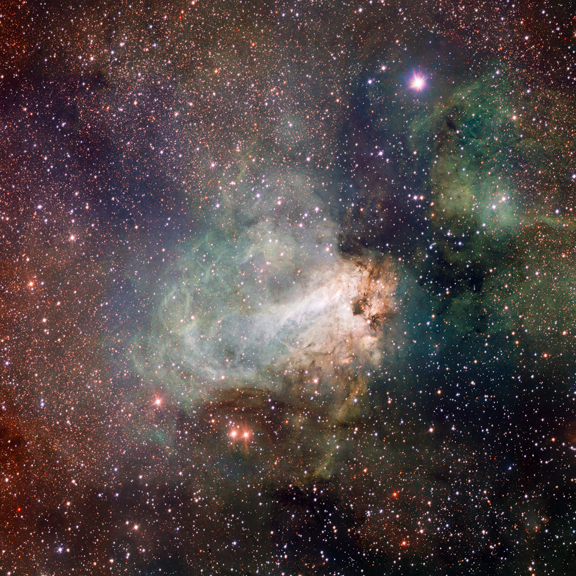 Astronomers from the University of Amsterdam have shown that forming massive stars are much bigger than grown-up massive stars. Their observations confirm the theory that, at the conclusion of the formation process, a massive star further contracts until it has reached a stable equilibrium. The results are published as a Letter in Astronomy & Astrophysics.

For many years it has been a challenge to obtain a clear spectrum of a massive star still in the process of formation. The reason being that forming stars are deeply embedded inside their parental clouds that obscure their birthplaces from view. Recently, a spectrum has been obtained of the young star B275 in the Omega Nebula (M17) with the new, powerful spectrograph X-shooter on ESO’s Very Large Telescope in Chile. This has resulted in the first firm spectral classification of a massive star on its way to the main sequence. The spectrum indicates that B275 is about three times as large as a normal main-sequence star about 7 times more massive than our Sun. This is in good agreement with the predictions of current star formation models.

At an earlier phase in the formation process, young massive stars are surrounded by a rotating gaseous disk, feeding the forming star. This so-called mass-accretion process is physically complicated and poorly understood, and is often accompanied by the presence of strong jets, as was reported earlier this year by the same research group: http://www.astronomie.nl/nieuws/2149/zeldzame_geboorte_van_een_zware_ster_waargenomen.html

When the accretion process is finished, the surrounding disk disappears, and the surface of the new star becomes visible; B275 has entered this phase. The core temperature of the new star is now high enough for hydrogen fusion to commence. The star further contracts until the energy production in the core exactly compensates the radiation losses at the stellar surface, and a stable equilibrium has been reached.

The X-shooter spectrum indicates that the surface temperature of the young massive star B275 is significantly lower than usual for such a luminous star (1600 times more luminous than the Sun, i.e., the luminosity of a seven solar mass star). This discrepancy is solved by assigning a larger radius to the star. That is exactly what the sharp spectral lines of B275 demonstrate: the spectrum of a giant star.

First author Bram Ochsendorf analyzed the spectrum as part of his master’s research project carried out at the University of Amsterdam. “The large wavelength coverage of X-shooter provides the opportunity to determine many stellar properties at once, like the surface temperature, size, and the presence of a disk”, says Ochsendorf, who just started a PhD project in Leiden.

The spectrum of B275 was obtained during the X-shooter science verification process by co-authors Rolf Chini and Vera Hoffmeister from the Ruhr-Universitaet in Bochum, Germany. “This is a beautiful confirmation of new theoretical models describing the formation process of massive stars, obtained thanks to the extreme sensitivity of X-shooter”, remarks Ochsendorf’s supervisor Prof. Lex Kaper.

X-shooter: X-shooter is the latest arrival on ESO’s Very Large Telescope on Cerro Paranal in Chile. X-shooter is the most powerful spectrograph in the world and has a unique wavelength coverage: from 300 nm (UV) to 2500 nm (infrared) in one “shot”. X-shooter has been built by an international consortium; the infrared spectrograph arm has been designed and constructed in the Netherlands, with financial support from NOVA, NWO, ASTRON and the universities of Amsterdam and Nijmegen.

Fig. 1: http://www.astronomie.nl/nieuws/2351/zware_sterren_worden_als_reuzen_geboren.html Artist’s impression illustrating the formation process of massive stars. At the end of the formation process, the surrounding accretion disk disappears, revealing the surface of the young star. At this phase the young massive star is much larger than when it has reached a stable equilibrium, i.e., when arriving on the so-called main sequence (c) Lucas Ellerbroek/Lex Kaper University of Amsterdam