By SpaceRef Editor
October 30, 2007
Filed under Harvard-Smithsonian Center for Astrophysics, US

Using two NASA satellites, astronomers have discovered a black hole that
obliterates a record announced just two weeks ago. The new black hole, with
a mass 24 to 33 times that of our Sun, is the heftiest known black hole that
orbits another star.

“We weren’t expecting to find a stellar-mass black hole this massive,” says
Andrea Prestwich of the Harvard-Smithsonian Center for Astrophysics in
Cambridge, Mass., lead author of the discovery paper in the November 1
Astrophysical Journal Letters. “We now know that black holes that form from
dying stars can be much larger than we had realized.” 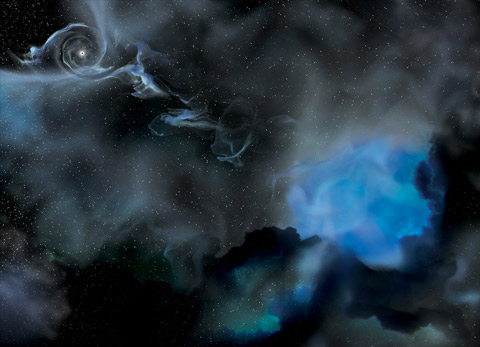 The black hole is located in the nearby dwarf galaxy IC 10, 1.8 million
light-years from Earth in the constellation Cassiopeia. Prestwich’s team
could measure the black hole’s mass because it has an orbiting companion: a
hot, highly evolved star. The star is ejecting gas in the form of a wind.
Some of this material spirals toward the black hole, heats up, and gives off
powerful X-rays before crossing the point of no return.

In November 2006, Prestwich and her colleagues observed the dwarf galaxy
with NASA’s Chandra X-ray Observatory. The group discovered that the
galaxy’s brightest X-ray source, IC 10 X-1, exhibits sharp changes in X-ray
brightness. Such behavior suggests a star periodically passing in front of a
companion black hole and blocking the X-rays, creating an eclipse. In late
November, NASA’s Swift satellite confirmed the eclipses and revealed details
about the star’s orbit. The star in IC 10 X-1 appears to orbit in a plane
that lies nearly edge-on to Earth’s line of sight, so a simple application
of Kepler’s Laws show that the companion black hole has a mass of at least
24 Suns. 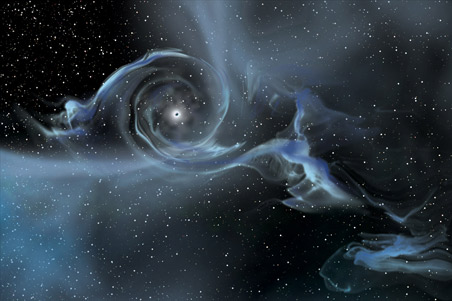 There are still some uncertainties in the black hole’s mass estimate, but as
Prestwich notes, “Future optical observations will provide a final check.
Any refinements in the IC 10 X-1 measurement are likely to increase the
black hole’s mass rather than reduce it.”

The black hole’s large mass is surprising because massive stars generate
powerful winds that blow off many Suns worth of gas before the stars
explode. Calculations suggest massive stars in our galaxy leave behind black
holes no heavier than about 15 Suns.

The IC 10 X-1 black hole has gained mass since its birth by gobbling up gas
from its companion star, but the rate is so slow that the black hole would
have gained no more than 1 or 2 solar masses. “This black hole was born fat;
it didn’t grow fat,” says astrophysicist Richard Mushotzky of NASA Goddard
Space Flight Center in Greenbelt, Md., who is not a member of the discovery
team.

The progenitor star probably started its life with 60 or more solar masses.
Like its host galaxy, it was probably deficient in elements heavier than
hydrogen and helium. In massive, luminous stars with a high fraction of
heavy elements, the extra electrons of elements such as carbon and oxygen
“feel” the outward pressure of light and are more susceptible to being swept
away in stellar winds. But with its low fraction of heavy elements, the IC
10 X-1 progenitor shed comparatively little mass before it exploded, so it
could leave behind a heavier black hole.

“Massive stars in our galaxy today are probably not producing very heavy
stellar-mass black holes like this one,” says coauthor Roy Kilgard of
Wesleyan University in Middletown, Conn. “But there could be millions of
heavy stellar-mass black holes lurking out there that were produced early in
the Milky Way’s history, before it had a chance to build up heavy elements.”

This release is being issued jointly with NASA.

Headquartered in Cambridge, Mass., the Harvard-Smithsonian Center for
Astrophysics (CfA) is a joint collaboration between the Smithsonian
Astrophysical Observatory and the Harvard College Observatory. CfA
scientists, organized into six research divisions, study the origin,
evolution and ultimate fate of the universe.