At first, figuring out how pebble-sized rocks organize themselves in evenly-spaced patterns in sand seemed simple and even intuitive. But once Andrew Leier, an assistant geoscience professor at the U of C, started observing, he discovered that the most commonly held notions did not apply.

And even more surprising, was that his findings revealed answers to NASA’s questions about sediment transport and surface processes on Mars. Those results are published in this month’s edition of Geology.

Leier first studied loose pebbles and rocks, also known as clasts, when he was looking at sand dunes in Wyoming and noticed that the clasts seemed to spread away from each other in an almost organized fashion. It turns out,NASA was examining similar patterns on the sandy surface of Mars. (See figure No. 1 below.)

NASA proposed that wind was moving these rocks around. But Leier, who co-authored the study with Jon Pelletier at the University of Arizona and James Steidtmann at the University of Wyoming, says that would be impossible. They also discovered that rather than being pushed backward by the breeze, clasts actually tend to move into the direction of prevailing winds.

“The wind is less effective at moving clasts on Mars because the atmosphere is less dense,” says Leier. “And for the wind to move the rocks downwind, it would have to be moving on the order of 8,000 kilometres an hour.”

Instead, the loose sand around clasts is removed by the wind, causing scour-pits to form in front of larger clasts. Eventually, the rocks fall forward (or laterally) into the scours and then, the process repeats. Behind the larger grains, the sand is protected from the wind erosion and so a “sand-shadow” develops. This shadow prevents the clasts from being pushed downwind and from bunching up with one another. (See figure No. 2 below.) 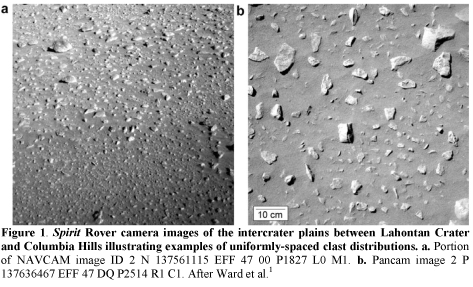 Leier and his team first came up with these results through observation but then took them to a wind tunnel at the University of Wyoming to test the theory. Here, a tightly grouped bunch of small pebbles were buried in sand and then the wind tunnel was activated and results photographed. Surprisingly, as the sand was eroded by the wind, the larger clasts moved into the wind and spread out from one another. 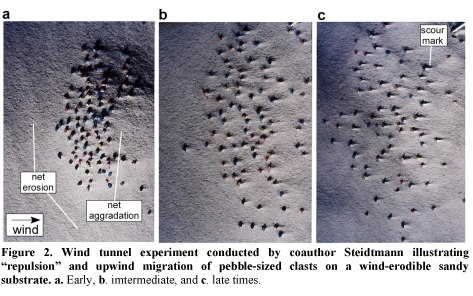 Numerical models, based on the physics of wind transport, were run to test these ideas. Just like what was observed in the wind tunnel, the numerical models predict that as the sand is blown away, the large pebbles will spread out from one another, and often move into the direction of the wind, regardless of their initial configuration.

So through a few simple feedbacks, the larger grains on a windy, sandy surface will inherently spread out and organize (or dis-organize) themselves.

“What I find most interesting about this is that something as seemingly mundane as the distribution of rocks on a sandy, wind-blown surface can actually be used to tell us a lot about how wind-related processes operate on a place as familiar as the Earth and as alien as Mars,” says Leier. “It’s chaotic and simple at the same time.”

Leier’s article Wind-driven reorganization of coarse clasts on the surface of Mars is published in the January 2009 edition of Geology. It can be viewed online at www.gsajournals.org/.