Martian Moon Phobos May Have Been Formed by Catastrophic Blast

Scientists now have firm indications that the Martian satellite Phobos formed relatively near its current location via re-accretion of material blasted into Mars’s orbit by some catastrophic event. Two independent approaches of compositional analyses of thermal infrared spectra, from ESA’s Mars Express and NASA’s Mars Global Surveyor missions, yield very similar conclusions. The re-accretion scenario is further strengthened by the measurements of Phobos’s high porosity from the Mars Radio Science Experiment (MaRS) on board Mars Express. These results will be presented by Dr. Giuranna and Dr. Rosenblatt at the European Planetary Science Congress in Rome, on Monday 20th September.

The origin of the Martian satellites Phobos and Deimos is a long standing puzzle. It has been proposed that both moons may be asteroids formed in the outer part of the main asteroid belt (between Mars and Jupiter) and were subsequently captured by Mars’ gravity. Alternative scenarios suggested that both moons were formed in situ by the re-accretion of rocky-debris blasted into Mars’s orbit after a large impact or by re-accretion of remnants of a former moon which was destroyed by Mars’s tidal force.

“Understanding the composition of the Martian moons is the key to constrain these formation theories,” says Dr. Giuranna of the Istituto Nazionale di Astrofisica in Rome, Italy.

Previous observations of Phobos at visible and near-infrared wavelengths have been interpreted to suggest the possible presence of carbonaceous chondritic meteorites, carbon-rich “ultra primitive” materials, commonly associated with asteroids dominant in the middle part of the asteroid belt. This finding would support the early asteroid capture scenario. However recent thermal infrared observations from the Mars Express Planetary Fourier Spectrometer, show poor agreement with any class of chondritic meteorite. They instead argue in favor of the in-situ scenarios.

“We detected for the first time a type of mineral called phyllosilicates on the surface of Phobos, particularly in the areas northeast of Stickney, its largest impact crater,” says Dr. Giuranna. 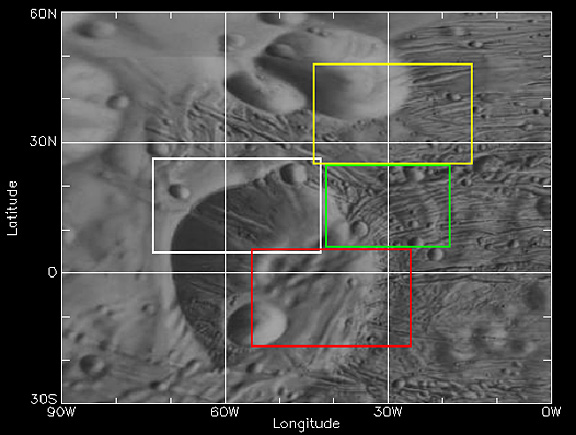 “This is very intriguing as it implies the interaction of silicate materials with liquid water on the parent body prior to incorporation into Phobos. Alternatively phyllosilicates may have formed in situ, but this would mean that Phobos required sufficient internal heating to enable liquid water to remain stable. More detailed mapping, in-situ measurements from a lander, or sample return would ideally help to settle this issue unambiguously,” he added.

Other observations appear to match the types of minerals identified on the surface of Mars. Thus, the derived composition on Phobos appears more closely related to Mars than objects from other relatively locations in the solar system.

“The asteroid capture scenarios also have difficulties in explaining the current near-circular and near-equatorial orbit of both Martian moons,” says Dr Rosenblatt of the Royal Observatory of Belgium.

The MaRS team, led by Dr. Martin Patzold of the Rheinisches Institut fur Umweltforschungh an der Universitat zu Koln, Germany, has used the frequency variations of the radio-link between the spacecraft and the Earth-based tracking stations, in order to precisely reconstruct the motion of the spacecraft when it is perturbed by the gravitational attraction of Phobos. From this the team was able to reduce Phobos’s mass.

“We obtained the best measurement of its mass to date, with a precision of 0.3%,” relates Dr. Rosenblatt.

Phobos’s volume past estimations were also improved thanks to the cameras onboard MEx. The MaRS team was thus able to derive the best-ever estimate of Phobos’s density as 1.86+/-0.02 g/cm3.

“This number is significantly lower than the density of meteoritic material associated with asteroids. It implies a sponge-like structure with voids making up 25-45% in Phobos’s interior,” says Dr. Rosenblatt. “High porosity is required in order to absorb the energy of the large impact that generated Stickney crater without destroying the body”, confirms Dr. Giuranna. “In addition a highly porous interior of Phobos, as proposed by the MaRS team, supports the re-accretion formation scenarios.”

A highly porous asteroid would have probably not survived if captured by Mars. Alternatively, such a highly porous Phobos can result from the re-accretion of rocky-blocks in Mars’ orbit. During re-accretion, the largest blocks re-accrete first because of their larger mass, forming a core with large boulders. Then, the smaller debris re-accrete but do not fill the gaps left between the large blocks because of the low self-gravity of the small body in formation. Finally, a relatively smooth surface masks the space of voids inside the body, which then can only be indirectly detected. Thus, a highly porous interior of Phobos, as proposed by the MaRS team, supports the re-accretion formation scenarios. 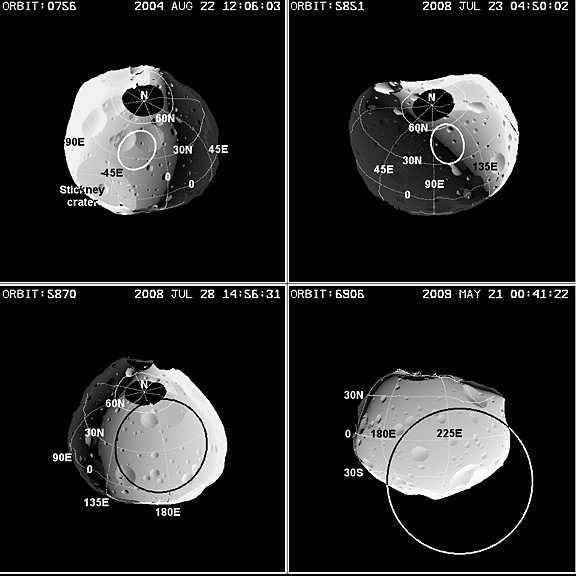 The origin of both Martian moons is not, however, definitively elucidated since the density alone cannot provide the true composition of their interior. The future Russian Phobos-Grunt mission (Phobos Sample Return), to be launched in 2011, will certainly contribute to our understanding regarding the origin of Phobos.

The full text has been submitted for publication to the Planetary and Space Science journal’s Special Issue on Comparative Planetology: Venus-Earth-Mars. http://www.sciencedirect.com/science/journal/00320633

Images can be found at: http://www.europlanet-eu.org/outreach/index.php?option=com_content&task=view&id=304&Itemid=41

Figure 1 (a) & (b): Spatial locations of (a) PFS and (b) TES observations of Phobos used for the compositional analysis. Note that PFS orbit 0756 and TES yellow class observations correspond to almost the same area on the surface (see also Figure 2a).

Movie: A schematic view of the Mars Express trajectory perturbations when the spacecraft flew by Phobos at close distance can be found at: http://didac.oma.be/phobos.php (Realization: Royal Observatory of Belgium).

EUROPEAN PLANETARY SCIENCE CONGRESS (EPSC) 2010 EPSC 2010 is organized by Europlanet, a Research Infrastructure funded under the European Commission’s Framework 7 Programme, in association with the European Geosciences Union, with the support of the Italian National Institute for Astrophysics (INAF) and the INAF Institute of Physics of Interplanetary Science (IFSI) in Rome. EPSC is the major meeting in Europe for planetary scientists. The 2010 program comprises 48 sessions and workshops covering a wide range of planetary topics. EPSC 2010 is taking place at the Angelicum Center – Pontifical University of St. Thomas Aquinas, Rome, Italy from Sunday 19 September to Friday 24 September 2010. For further details, see the meeting website: http://meetings.copernicus.org/epsc2010/