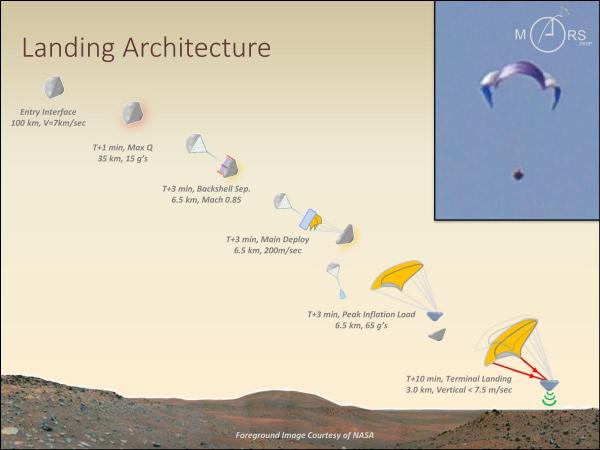 Microprobes that piggyback on Mars-bound spacecraft could investigate areas currently unavailable to surface instruments, a Planetary Science Institute researcher said.
The payload could be steered to scientifically desired targets during the gliding phase, enabling a wide variety of enticing research locations including canyons, fresh impact crater sites, volcanic region and glaciers, PSI’s Rebecca M.E. Williams said during a poster presentation today at the 46th Lunar and Planetary Science Conference in Houston.
The microprobes could target scientifically compelling landing sites at minimal cost, Williams said. Williams is collaborating with Matthew Eby at Aerospace Corp and a group or engineers and scientists at JPL led by Robert Staehle in developing a secondary payload capability called MARSDROP to tag along on larger primary missions to Mars.
MARSDROP is a small reentry vehicle that has successfully been flown from Earth orbit. Using this design to reduce cost, the team estimates that two MARSDROP landers would add less than 5 percent to the base cost of a major mission.   MARSDROP is a cost-effective way to double or triple the number of Mars landers for each mission opportunity.
“Instead of a traditional parachute, MARSDROP pops out a steerable parawing that enables targeted delivery of a microprobe. Using terrain-relative video navigation, a pinpoint landing within tens of meters would be achievable. This MARSDROP capability opens up a number of very interesting, previously unreachable, sites for surface-based investigations,” said PSI Senior Scientist Williams. “In addition, MARSDROP can help lay the groundwork for future human exploration of Mars by characterizing biohazards like Martian dust and assessing the availability of key resources, such as water from which oxygen and rocket propellant can be made.”
“What is particularly exciting about this new approach is the possibility of landing in new locations like the canyons in Valles Marineris or at modern geologically-active sites such as south polar geysers or locations with inferred seasonal release of surface water flows. This provides the opportunity to tackle a range of science questions that aren’t possible in the near-term with existing landing site restrictions,” Williams said. “With MARSDROP we can exploit the excess mass capability on the cruise-stage vehicle to enhance the science return from each mission.”
Visit http://www.psi.edu/news/marsdropimage to see how MARSDROP would land on a planet.
The team has begun exploring possible payload components that fit within the 30 centimeter (about 12 inches) capsule and 1 kg (about 2 pounds) size and weight constraint.  Cameras, mineral and fluorescence microscopes would yield insight into the surface geology, conduct surface change monitoring, and detect possible organics or astrobiologically relevant minerals.  Network science could be achieved with multiple MARSDROPs carrying weather sensors and seismometers to detect impact events for subsurface characterization.
This exploration technology could also be used deployed to other worlds with atmospheres thicker than Mars including Titan and Venus.