A new study of a meteorite that originated from Mars has revealed a series of microscopic tunnels that are similar in size, shape and distribution to tracks left on Earth rocks by feeding bacteria.

And though researchers were unable to extract DNA from the Martian rocks, the finding nonetheless adds intrigue to the search for life beyond Earth.

Results of the study were published in the latest edition of the journal Astrobiology.

Martin Fisk, a professor of marine geology in the College of Oceanic and Atmospheric Sciences at Oregon State University and lead author of the study, said the discovery of the tiny burrows do not confirm that there is life on Mars, nor does the lack of DNA from the meteorite discount the possibility.

“Virtually all of the tunnel marks on Earth rocks that we have examined were the result of bacterial invasion,” Fisk said. “In every instance, we’ve been able to extract DNA from these Earth rocks, but we have not yet been able to do that with the Martian samples.

“There are two possible explanations,” he added. “One is that there is an abiotic way to create those tunnels in rock on Earth, and we just haven’t found it yet. The second possibility is that the tunnels on Martian rocks are indeed biological in nature, but the conditions are such on Mars that the DNA was not preserved.”

More than 30 meteorites that originated on Mars have been identified. These rocks from Mars have a unique chemical signature based on the gases trapped within. These rocks were “blasted off” the planet when Mars was struck by asteroids or comets and eventually these Martian meteorites crossed Earth’s orbit and plummeted to the ground.

One of these is Nakhla, which landed in Egypt in 1911, and provided the source material for Fisk’s study. Scientists have dated the igneous rock fragment from Nakhla – which weighs about 20 pounds – at 1.3 billion years in age. They believe that the rock was exposed to water about 600 million years ago, based on the age of clay found inside the rocks. 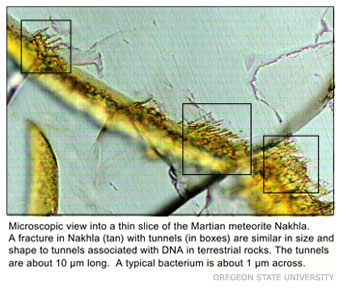 “It is commonly believed that water is a necessary ingredient for life,” Fisk said, “so if bacteria laid down the tunnels in the rock when the rock was wet, they may have died 600 million years ago. That may explain why we can’t find DNA – it is an organic compound that can break down.”

Other authors on the paper include Olivia Mason, an OSU graduate student; Radu Popa, of Portland State University; Michael Storrie-Lombardi, of the Kinohi Institute in Pasadena, Calif.; and Edward Vicenci, from the Smithsonian Institution.

Fisk and his colleagues have spent much of the past 15 years studying microbes that can break down igneous rock and live in the obsidian-like volcanic glass. They first identified the bacteria through their signature tunnels then were able to extract DNA from the rock samples – which have been found in such diverse environments on Earth as below the ocean floor, in deserts and on dry mountaintops.

They even found bacteria 4,000 feet below the surface in Hawaii that they reached by drilling through solid rock.

In all of these Earth rock samples that contain tunnels, the biological activity began at a fracture in the rock or the edge of a mineral where the water was present. Igneous rocks are initially sterile because they erupt at temperatures exceeding 1,000 degrees C. – and life cannot establish itself until the rocks cool. Bacteria may be introduced into the rock via dust or water, Fisk pointed out.

“Several types of bacteria are capable of using the chemical energy of rocks as a food source,” he said. “One group of bacteria in particular is capable of getting all of its energy from chemicals alone, and one of the elements they use is iron – which typically comprises 5 to 10 percent of volcanic rock.”

Another group of OSU researchers, led by microbiologist Stephen Giovannoni, has collected rocks from the deep ocean and begun developing cultures to see if they can replicate the rock-eating bacteria. Similar environments usually produce similar strains of bacteria, Fisk said, with variable factors including temperature, pH levels, salt levels, and the presence of oxygen.

The igneous rocks from Mars are similar to many of those found on Earth, and virtually identical to those found in a handful of environments, including a volcanic field found in Canada.

One question the OSU researchers hope to answer is whether the bacteria begin devouring the rock as soon as they are introduced. Such a discovery would help them estimate when water – and possibly life – may have been introduced on Mars.