A geologic mapping project using NASA spacecraft data offers new evidence that expansive lakes existed long ago on Mars. The research points to a series of sedimentary deposits consistent with what would relate to large standing bodies of water in Hellas Planitia located in the southern hemisphere of Mars, said by Dr. Leslie Bleamaster, research scientist at the Planetary Science Institute.

Fine-layered outcrops around the eastern rim of Hellas have been interpreted as a series of sedimentary deposits resulting from erosion and transport of highland rim materials into a basin-wide standing body of water, Bleamaster said. Hellas basin, more than 2,000 km across and 8 km deep, is the largest recognized impact structure on the Martian surface, he said.

The mapping project reinforces earlier research that initially proposed Hellas-wide lakes citing different evidence in the west, he said. The new map and accompanying map pamphlet may be found at http://pubs.usgs.gov/sim/3096/

“This mapping makes geologic interpretations consistent with previous studies, and constrains the timing of these putative lakes to the early-middle Noachian period on Mars, between 4.5 and 3.5 billion years ago,” he said.

A systematic search of high-resolution images revealed that eastern Hellas Planitia, where the fine-layered floor deposits were discovered, is unique in nature representing a confluence between sedimentary sources and sinks. The circum-Hellas highlands represent a significant percentage of the southern hemisphere of Mars and have served as a locus for volcanic and sedimentary activity throughout Martian geologic time. Hellas Planitia preserves the materials shed from these highlands and holds the key to further unraveling some of Mars’ long held secrets.

“Our mapping and evaluation of landforms and materials of the Hellas region from the basin rim to floor provides further insight into Martian climate regimes and into the abundance, distribution, and flux of volatiles through history,” Bleamaster said. 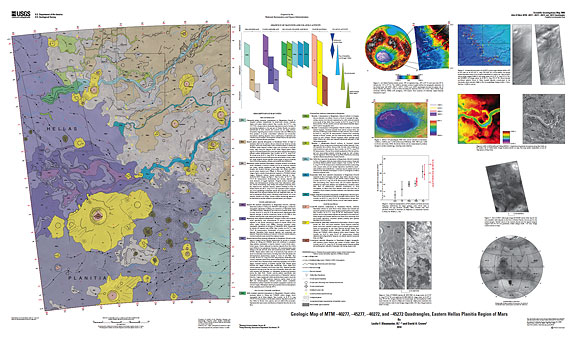 The Planetary Science Institute (www.psi.edu) is a private, nonprofit 501(c)(3) corporation dedicated to solar system exploration. It is headquartered in Tucson, Arizona, where it was founded in 1972. PSI scientists are involved in numerous NASA and international missions, the study of Mars and other planets, the Moon, asteroids, comets, interplanetary dust, impact physics, the origin of the solar system, extra-solar planet formation, dynamics, the rise of life, and other areas of research. They conduct fieldwork in North America, Australia and Africa. They also are actively involved in science education and public outreach through school programs, children’s books, popular science books and art. PSI scientists are based in 15 states, the United Kingdom, France, Switzerland, Russia and Australia.