Magnetically-levitated Flies Offer Clues to Future of Life in Space 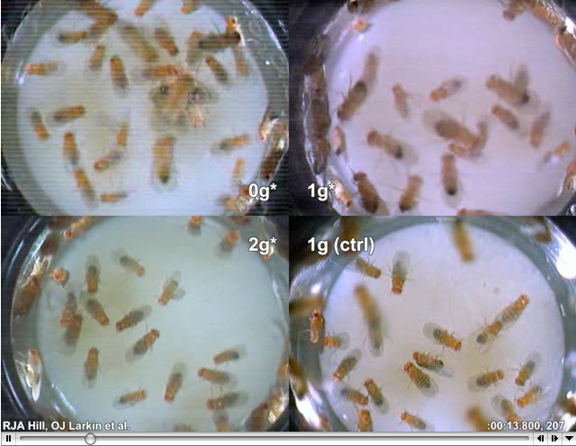 Using powerful magnets to levitate fruit flies can provide vital clues to how biological organisms are affected by weightless conditions in space, researchers at The University of Nottingham say.

The team of scientists has shown that simulating weightlessness in fruit flies here on earth with the use of magnets causes the flies to walk more quickly — the same effect observed during similar experiments on the International Space Station.

Dr Richard Hill, an EPSRC research fellow in the University’s School of Physics and Astronomy, is one of the researchers involved in the study, which is published in the latest edition of the Royal Society journal Interface.

“It’s also important to remember that, in our future endeavours to explore space, setting up permanent bases on our Moon, or Mars for example, or other planets, it will be crucial to understand the effects of weightlessness on all living organisms: our long-term survival will of course require us to take with us many different biological organisms.”

The team of scientists from Nottingham’s Schools of Physics and Astronomy and Biology used the university’s powerful superconducting magnet to produce a very strong magnetic field of around 16 Tesla — approximately 350,000 times stronger than the strength of the Earth’s field.

Inside the superconducting solenoid magnet, the diamagnetic repulsive force on the flies can be large enough to just balance the force of gravity so that they levitate with no support. This effect was first demonstrated by Nobel Prize-winning physicist Andre Geim and colleagues at the University of Nijmegen in 1997 when they used the same technique to levitate a live frog.

“In orbit, aboard the international space station for example, gravity is still present, but because an orbiting body is effectively in ‘free-fall’, the centrifugal force on the astronauts (because they’re going around the planet so quickly), is large enough to balance out the force of gravity. Here, we’re using the diamagnetic force to balance gravity instead of centrifugal force.”

Dr Hill said: “What we showed was that the flies in the magnet behaved in the same way that they behave in space. They walk more quickly. Why they do this, we really don’t know yet. It may be because the flies just find moving around in weightlessness easier on their joints and muscles, or it could be that it’s some kind of response to their confusion about which way is up and down when gravity is absent.”

The advantage of doing these experiments on the ground is that it’s a lot cheaper and much easier, and scientists do not need to worry about the effects of high g-forces endured when launching the flies into space on a rocket. It’s also very easy to do the comparison between flies in weightlessness and flies in ordinary gravity: the scientists set up the same experiment in different positions in the magnet and run the experiments simultaneously. By moving the flies to different positions in the magnetic field, they can simulate gravities between zero-g and 2g (twice the Earth’s gravity conditions), enabling them to simulate the gravity on the Moon or Mars.

The work was conducted in collaboration with scientists at the Centro de Investigaciones Biologicas in Madrid and took place in The University of Nottingham’s superconducting magnet supplied by Oxford Instruments. The project is supported by the UK Engineering and Physical Sciences Research Council (EPSRC).

A video of the magnetically-levitated fruit flies can be viewed at http://www.nottingham.ac.uk/~ppzlev/fruitflies_MPEG4.avi