By SpaceRef Editor
April 16, 2015
Filed under Commerce, Made in Space, US 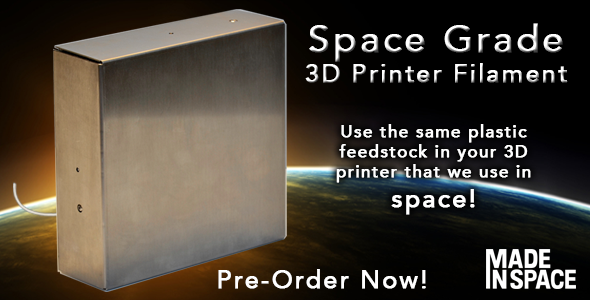 Made In Space, a company that focuses on selling products in space, announced plans to sell physical products on Earth. In addition to operating as a space-based 3D printing service bureau for NASA and other space developers, the company will begin serving terrestrial markets as well. Partnering with major 3D printing filament resellers, Made In Space hopes that by making their space grade resources widely available, they will boost the continued expansion of the commercial space sector as well as help catalyze new, unanticipated space development activities.

“We selected our material after testing dozens of different vendors and have determined it to be some of the highest quality available.” – Matthew Napoli, Made In Space – Director of In-Space Manufacturing

The first product offerings will focus on the plastic filament that Made In Space uses for in-space manufacturing. Four main filament products are available for pre-order today with prices that reflect their level of space readiness. These initial products are meant for a range of potential customers, from makers who want quality printer feedstock at affordable prices to zero-gravity designers who want to use Made In Space’s “AstroABS” to reduce the differences between their test prints on Earth and their planned prints in space. With the inclusion of the “AstroABS Canister” product, Made In Space hopes that some of their products will be purchased for reasons other than 3D printing. Advertised to museums, space collectors, and 3D printing enthusiasts, the AstroABS Canister serves as a contemporary space souvenir, identical to the space hardware currently aboard the International Space Station, and as a form of support for the Made In Space vision.

100% of Made In Space’s profits from all of the products will be used to further the company’s vision for creating a multi-planetary civilization. By leveraging the new capabilities that exponential technologies provide, Made In Space plans to continue revolutionizing what it means to be a modern space developer and create the necessary tools that will enable humanity to colonize space.

“This terrestrial store is a logical extension of the Made In Space explorer spirit. We have consistently said that our technology will open up new markets for space development and with this announcement, we are doing just that.  We are working with some of the world’s largest 3D printing suppliers, providing universal access to the tools we use ourselves, with the goal of advancing this new era of in-space manufacturing.” -Brad Kohlenberg, Made In Space – Business Development Engineer

In addition to selling filament on their own website, Made In Space is partnering with several major 3D printing filament suppliers in order to make their filament even more accessible to interested parties.  Octave.com, 3DSupplyWorld.com, FilamentDirect.com, and PrinterPlayground.com have confirmed their participation with several other entities already expressing interest.

Filament resellers interested in becoming an affiliate for the world’s only space grade filament should contact business@madeinspace.us.

The new store can be found here: madeinspace.us/terrestrial-offerings