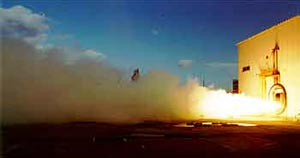 The M-25 SIM-3 simulation motor successfully completed
its static firing test November 27, 2000. This is the 1/3.5 scale model
of an improved M-25 motor version of the second stage M-24 motor of the
M-V rocket. The two previous scale-type motor firing tests had already
shown that the motor performed as expected under 90 atm pressure, and
the CFRP motor case confirmed that it was fully functional.

Ignition was performed at 10:30 AM under ideal weather
and wind-direction conditions, and in addition to good ignition and combustion,
excellent measurement and optical data records were obtained.

Anticipating hyperbaric combustion, the fire damage
was minimal to the ITE-method (Integral Throat Entrance) nozzle throat
(made by 3D-C/C) and its liner at the exit (made by CFRP), which led us
to be confident of success with the M-25 motor’s firing test scheduled
for the end of the year 2000.

It also succeeded in collecting alumina particles
emitted from the nozzle.