NASA’s Lunar Reconnaissance Orbiter (LRO) captured the sharpest images ever taken from space of the Apollo 12, 14 and 17 landing sites. Images show the twists and turns of the paths made when the astronauts explored the lunar surface. 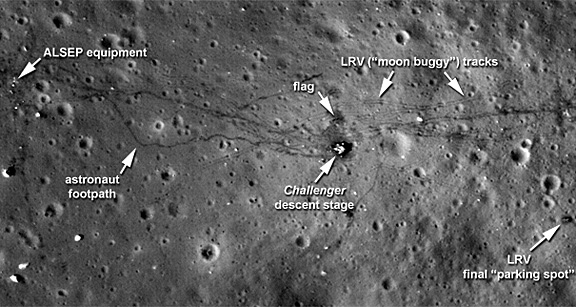 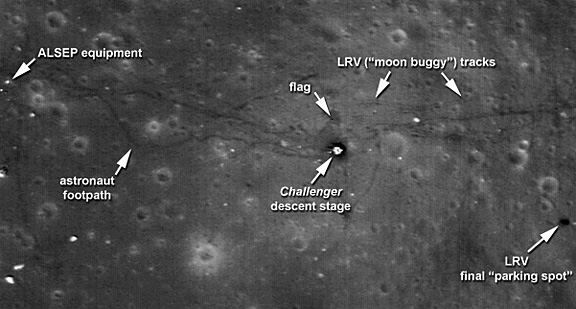 The top image was released today; the bottom image is a zoom-in on an LRO image released in 2009. LRO was moved into a lower orbit to capture the new image. The images do not line up perfectly because of differences in lighting conditions, angle of the LRO Camera, and other variables. Image brightness and contrast have been altered to highlight surface details. (Credit: NASA’s Goddard Space Flight Center/ASU)

At the Apollo 17 site, the tracks laid down by the lunar rover are clearly visible, along with the last foot trails left on the moon. The images also show where the astronauts placed some of the scientific instruments that provided the first insight into the moon’s environment and interior.

“We can retrace the astronauts’ steps with greater clarity to see where they took lunar samples,” said Noah Petro, a lunar geologist at NASA’s Goddard Space Flight Center in Greenbelt, Md., who is a member of the LRO project science team.

All three images show distinct trails left in the moon’s thin soil when the astronauts exited the lunar modules and explored on foot. In the Apollo 17 image, the foot trails, including the last path made on the moon by humans, are easily distinguished from the dual tracks left by the lunar rover, which remains parked east of the lander.

“The new low-altitude Narrow Angle Camera images sharpen our view of the moon’s surface,” said Arizona State University researcher Mark Robinson, principal investigator for the Lunar Reconnaissance Orbiter Camera (LROC). “A great example is the sharpness of the rover tracks at the Apollo 17 site. In previous images the rover tracks were visible, but now they are sharp parallel lines on the surface.”

The top image was released today; the bottom image is a zoom-in on an LRO image released in 2009. LRO was moved into a lower orbit to capture the new image. The images do not line up perfectly because of differences in lighting conditions, angle of the LRO Camera, and other variables. Image brightness and contrast have been altered to highlight surface details. (Credit: NASA’s Goddard Space Flight Center/ASU)

At each site, trails also run to the west of the landers, where the astronauts placed the Apollo Lunar Surface Experiments Package (ALSEP) to monitor the moon’s environment and interior.

This equipment was a key part of every Apollo mission. It provided the first insights into the moon’s internal structure, measurements of the lunar surface pressure and the composition of its atmosphere. Apollo 11 carried a simpler version of the science package.

One of the details that shows up is a bright L-shape in the Apollo 12 image. It marks the locations of cables running from ALSEP’s central station to two of its instruments. Although the cables are much too small for direct viewing, they show up because they reflect light very well.

The higher resolution of these images is possible because of adjustments made to LRO’s orbit, which is slightly oval-shaped or elliptical. “Without changing the average altitude, we made the orbit more elliptical, so the lowest part of the orbit is on the sunlit side of the moon,” said Goddard’s John Keller, deputy LRO project scientist. “This put LRO in a perfect position to take these new pictures of the surface.”

The maneuver lowered LRO from its usual altitude of approximately 31 miles (50 kilometers) to an altitude that dipped as low as nearly 13 miles (21 kilometers) as it passed over the moon’s surface. The spacecraft has remained in this orbit for 28 days, long enough for the moon to completely rotate. This allows full coverage of the surface by LROC’s Wide Angle Camera. The cycle ends today when the spacecraft will be returned to its 31-mile orbit. 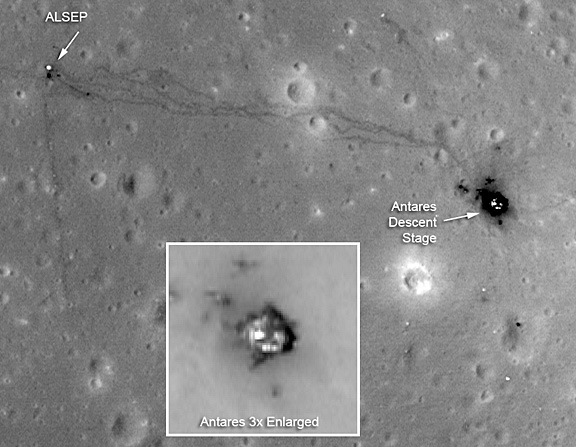 The paths left by astronauts Alan Shepard and Edgar Mitchell on both Apollo 14 moon walks are visible in this image. (At the end of the second moon walk, Shepard famously hit two golf balls.) The descent stage of the lunar module Antares is also visible. (Credit: NASA’s Goddard Space Flight Center/ASU)

“These images remind us of our fantastic Apollo history and beckon us to continue to move forward in exploration of our solar system,” said Jim Green, director of the Planetary Science Division at NASA Headquarters in Washington.