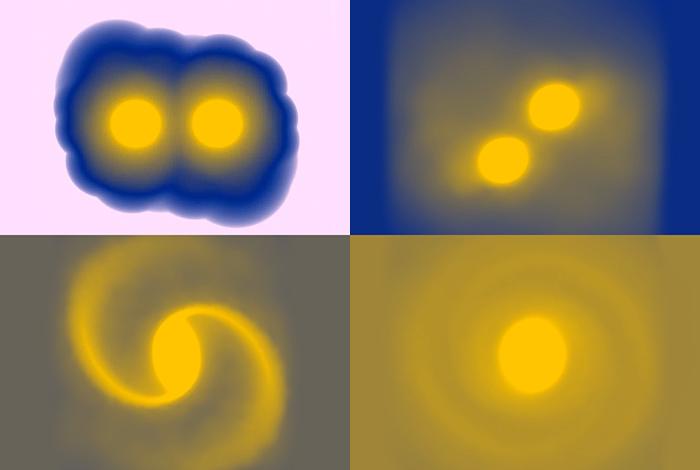 The merger of two equal mass neutron stars is simulated using the 3-D code SNSPH. As the two stars merge, their outer edge ejects a spiral of neutron-rich material. The radioactivity in this ejected material is the primary power source for the optical and infrared light observed in the kilonova. A single hyper-massive neutron star remains at the center in a wide field of ejecta material. This hyper-massive neutron star will quickly collapse to a black hole. CREDIT LANL ISTI/ASC Co-Design Summer School

Astrophysicist Chris Fryer was enjoying an evening with friends on August 25, 2017, when he got the news of a gravitational-wave detection by LIGO, the Laser Interferometer Gravitational-wave Observatory. The event appeared to be a merger of two neutron stars — a specialty for the Los Alamos National Laboratory team of astrophysicists that Fryer leads. As the distant cosmic cataclysm unfolded, fresh observational data was pouring in from the observation — only the fifth published since the observatory began operating almost two years ago.

“As soon as I heard the news, I knew that understanding all of the implications would require input from a broad, multi-disciplinary set of scientists,” said Fryer, who leads Los Alamos’ Center for Theoretical Astrophysics. Fryer’s colleagues, Ryan Wollaeger and Oleg Korobkin, outlined a series of radiation transport calculations and were given priority on Los Alamos’ supercomputers to run them. “Within a few hours, we were up and running.”

They soon discovered the LIGO data showed more ejected mass from the merger than the simulations accounted for. Other researchers at Los Alamos began processing data from a variety of telescopes capturing optical, ultraviolet, x-ray, and gamma-ray signals at observatories around the world (and in space) that had all been quickly directed to the general location of the LIGO discovery.

The theorists tweaked their models and, to their delight, the new LIGO data confirmed that heavy elements beyond iron were formed by the r-process (rapid process) in the neutron-star merger. The gravitational wave observation was having a major impact on theory.

The gravitational wave emission and related electromagnetic outburst came from the merger of two neutron stars in a galaxy called NGC 4993, about 130 million light-years away in the constellation Hydra. The neutron stars are the crushed remains of massive stars that once blew up in tremendous explosions known as supernovas.

With masses 10 and 20 percent greater than the sun’s and a footprint the size of Washington, D.C., the neutron stars whirled around each other toward their demise, spinning hundreds of times per second. As they drew closer like a spinning ice skater pulling in her arms, their mutual gravitational attraction smashed the stars apart in a high-energy flash called a short gamma-ray burst and emitted the tell-tale gravitational wave signal. Although short gamma-ray bursts have long been theorized to be produced through neutron star mergers, this event — with both gamma-ray and gravity wave observations — provides the first definitive evidence.

Beyond that theory work, though, Los Alamos scientists were engaged in a broad range of observations, astronomy, and data analysis tasks in support of the LIGO neutron-star discovery. Because the Laboratory’s primary mission centers on the nation’s nuclear stockpile, Los Alamos maintains deep expertise in nuclear physics and its cousin astrophysics, the physics of radiation transport, data analysis, and the computer codes that run massive nuclear simulations on world-leading supercomputers. In other words, the Laboratory is a logical partner for extending LIGO discoveries into theories and models and for confirming the conclusions about what the observatory discovers.

Among the key papers including Los Alamos’ work with the LIGO observation are the following:

“Multi-messenger Observations of a Binary Neutron Star Merger,” Abbott et al., Astrophysical Journal Letters. Reports the search and discovery of multi-wavelength emission, including a coincident short gamma-ray burst, from the event detected in gravitational waves. Los Alamos researchers were involved in several of the observational/instrumentation teams that enabled these discoveries.

“The X-ray counterpart to the gravitational wave event GW170817,” Troja et al., Nature. Detection of X-ray emission at a location coincident with the kilonova transient provides the missing observational link between short gamma-ray bursts and gravitational waves from neutron mergers and independently confirms the collimated nature of the GRB emission. Ryan Wollaeger of Los Alamos is second theory author, in charge of kilonova.

“The Emergence of a Lanthanide-Rich Kilonova Following the Merger of Two Neutron Stars,” Tanvir et al., Astrophysical Journal Letters. Reports on the discovery and monitoring of the near-infrared counterpart of a binary neutron-star merger event detected as a gravitational wave source by Advanced LIGO/Virgo (GW170817) and as a short gamma-ray burst by Fermi GBM and SPI-ACS (GRB\,170817A). The evolution of the transient light is consistent with predictions for the behavior of a “kilonova/macronova” powered by the radioactive decay of massive neutron-rich nuclides created through r-process nucleosynthesis in the neutron-star ejecta. Los Alamos’ Oleg Korobkin is the lead theory author on the paper. He and Ryan Wollaeger, also from Los Alamos, did the kilonova models to match to the data. Wes Even, Chris Fontes, and Chris Fryer of Los Alamos were also authors.

This research used resources provided by the Los Alamos National Laboratory Institutional Computing Program, which is supported by the U.S. Department of Energy National Nuclear Security Administration under Contract No. DE-AC52-06NA25396.