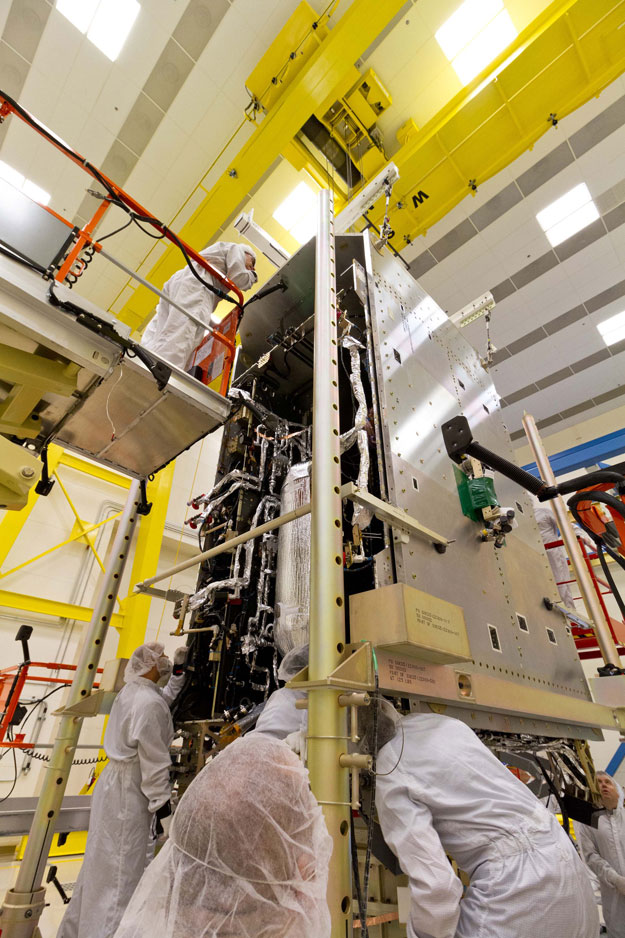 A team of technicians and engineers at Lockheed Martin [NYSE: LMT] has successfully mated together the large system and propulsion modules of the first GOES-R series weather satellite at the company’s Space Systems facilities near Denver, Colorado. The Geostationary Operational Environmental Satellite-R series (GOES-R) is NOAA’s next-generation geostationary weather satellites.

The system module of the A2100-based satellite houses more than 70 electronics boxes that comprise the three major electrical subsystems; command and data handling, communication, and electrical power. The propulsion core contains the integrated propulsion system and serves as the structural backbone of the satellite. The propulsion subsystem is essential for maneuvering the GOES-R satellite during transfer orbit to its final location, as well as conducting on-orbit repositioning maneuvers throughout its mission life.

“Positioning these large modules together in such a precise manor is a challenging task,” said Tim Gasparrini, vice president and program manager for GOES-R at Lockheed Martin Space Systems. “Our team spent many hours modeling and analyzing the procedure in our virtual virtually reality lab called the CHIL before tackling the mate in the cleanroom. This was a critical step in the integration of GOES-R and the team did an outstanding job.”

With the core spacecraft completed, the team will begin installing the six weather and solar-monitoring instruments onto the satellite. Functional testing and environmental testing phases of the program will follow this fall. GOES-R is scheduled to be launched in early 2016.

The NOAA Satellite and Information Service funds, manages, and will operate the GOES-R series satellites. NASA oversees the acquisition and development of the GOES-R spacecraft and instruments for NOAA. The program is co-located at NASA’s Goddard Space Flight Center in Greenbelt, Maryland.

Headquartered in Bethesda, Maryland, Lockheed Martin is a global security and aerospace company that employs approximately 113,000 people worldwide and is principally engaged in the research, design, development, manufacture, integration and sustainment of advanced technology systems, products and services. The Corporation’s net sales for 2013 were $45.4 billion.

More information about GOES-R can be found at:
http://www.goes-r.gov/
www.lockheedmartin.com/goesr