This ground test article will serve as a production pathfinder to validate the flight vehicle production processes and tools. When completed, this first full-sized, flight-like crew module will be tested on the ground in equivalent flight-like environments, including static vibration, acoustics and water landing loads. Results will be used to correlate sizing models for all subsystems on the vehicle.

The initial weld joined an Aluminum-Lithium (AL) 2195 cone panel and AL 2219 longeron using an innovative friction stir welding process. This high-strength, high quality welding process will be used for all crew module welds. Weld operations on the test article will continue for approximately three months. The structure will then undergo mechanical assembly, integration and testing in New Orleans and Denver.

The UWS II is part of the National Center for Advanced Manufacturing, managed by the University of New Orleans Foundation in partnership with NASA and the State of Louisiana.

Derek Townsend, Orion Crew Module senior manager noted, “The Orion team is excited to build NASA’s next generation spacecraft. This is the beginning of a new era in human space flight and America’s space program.” 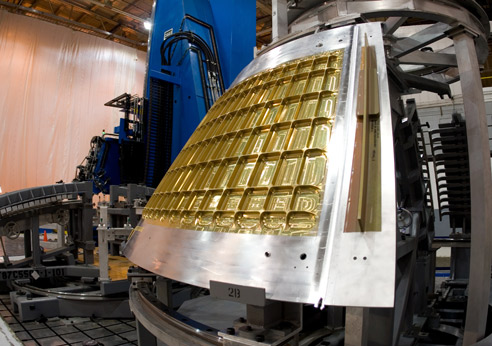 To see high- and low-resolution photos of the Orion weld, click on http://www.lockheedmartin.com/ssc/michoud/MichoudImages/orioncrewmodule.html

Lockheed Martin is the prime contractor to NASA for the Orion crew exploration vehicle, which is scheduled to make its first crewed flight in 2015. Orion will be a complex, state-of-the-art spacecraft with more capability, flexibility and adaptability than any previous human space flight vehicle.

Headquartered in Bethesda, Md., Lockheed Martin is a global security company that employs about 146,000 people worldwide and is principally engaged in the research, design, development, manufacture, integration and sustainment of advanced technology systems, products and services. The corporation reported 2008 sales of $42.7 billion.