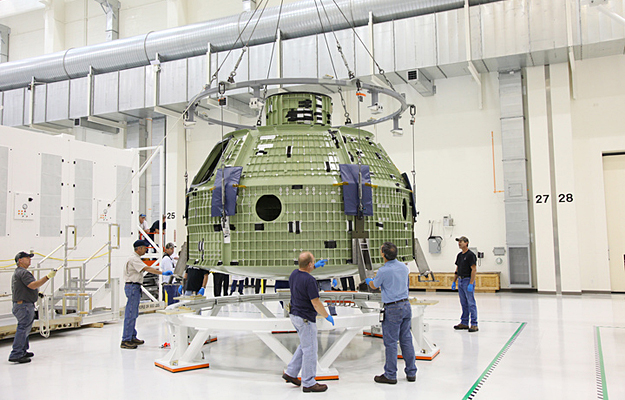 “Completing the Orion EFT-1 structure in New Orleans and delivering it to Kennedy Space Center is a tremendous accomplishment in the manufacturing of this deep space hardware,” said Cleon Lacefield, Lockheed Martin vice president and Orion program manager. “Now we have our eyes set on the Exploration Flight Test which will take this amazing spacecraft designed for crew significantly farther from Earth than any mission since Apollo.”

This Orion capsule will be the first to be sent into space. Over the next year and a half, the crew module will undergo final assembly, integration and testing at KSC in preparation for the Exploration Flight Test. Additional subsystems will be installed, including propulsion, thermal protection, environmental control, avionics, power, mechanisms, and landing and recovery systems.

The EFT-1 flight will be NASA’s first orbital flight test beyond low Earth orbit since the 1960s. The test will evaluate critical capabilities needed for safe deep-space exploration and reduce overall risk for Orion’s first human-rated flight in 2017. An uncrewed Orion capsule will be launched aboard a Delta IV Heavy to an altitude of more than 3,600 miles and demonstrate integrated vehicle performance for ascent, on-orbit flight, and a high energy re-entry profile with speeds up to 20,000 mph. The EFT-1 test will also enable the team to collect early critical flight performance data and assess the integration benefits for the Orion, Space Launch System and Ground Operations programs.

Lockheed Martin is the prime contractor to NASA for the Orion crew exploration vehicle – the world’s first interplanetary spacecraft designed for human exploration of our solar system. Orion is designed to carry astronauts beyond low Earth orbit on long-duration, deep-space missions to destinations such as asteroids, Lagrange Points or the moon.

NASA’s Johnson Space Center in Houston manages the Orion Program. Lockheed Martin leads the Orion industry team which includes major subcontractors as well as a nationwide network of minor subcontractors and small businesses. In addition, Lockheed Martin contracts with hundreds of small and disadvantaged business suppliers across the United States through an expansive supply chain network.

Headquartered in Bethesda, Md., Lockheed Martin is a global security and aerospace company that employs about 123,000 people worldwide and is principally engaged in the research, design, development, manufacture, integration and sustainment of advanced technology systems, products and services. The Corporation’s net sales for 2011 were $46.5 billion.

More information about NASA’s Orion spacecraft can be found at: