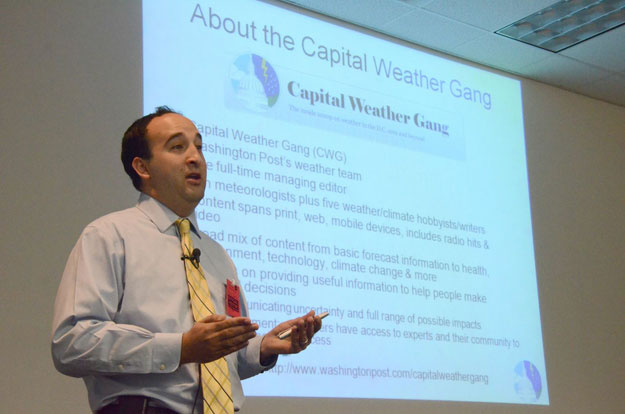 The weather has a long history as a standard conversation topic. For NASA’s Goddard Space Flight Center employees, however, the discussion on August 7 was a learning experience.

Throughout the talk, Samenow used his blog—which has become a leading source for Washington, D.C.-area weather forecasts—as an example in discussing the best ways to deliver science news.

Since moving from its own independent site to The Washington Post in 2008, the Capital Weather Gang blog has pioneered a new way to deliver local weather and the science surrounding it. The blog features a series of posts each day, ranging from details of the week’s weather forecast to explaining the science behind different weather phenomenon. Occasionally, the blog even features NASA research in posts on space weather or Earth science.

Samenow credited Capital Weather Gang’s success to creating an engaging environment for readers, a factor he considers key in today’s online media. The blog first set itself apart by allowing reader comments, a move that encouraged readers to discuss the weather instead of just reading about it.

“Weather is inherently a social topic,” Samenow said. “Weather blogging has transformed weather communication into a two-way conversation, and now the user is engaged in the process, enriching the whole experience.”

Samenow said Capital Weather Gang also draws readers in using a method he considers critical for all science news—explaining the science behind news. In addition to weather forecasting, Samenow said the blog has a science education aspect. On a given day, the blog might feature posts that use science to debunk summer weather myths or explain why the area is notorious for getting heat waves.

“What we try to focus on is communicating the weather story so it’s useful to people,” Samenow said. “People are coming to our blog to get forecast information, but are also getting exposed to the broad information we provide.”

By combining effective storytelling with science-based information, Samenow said science news could reach readers in the way Capital Weather Gang has. In order to make the dense material more accessible, Samenow said he bases the blog’s writing on being relevant, legitimate and credible.

Whether they’re forecasts or scientific explanations, Samenow said the posts are always backed up with evidence, sometimes NASA research, supporting the post. To further boost the blog’s credibility, the forecasts always feature confidence levels that illustrate the uncertainty associated with the day’s weather.

“Weather is an uncertain topic, so we put a strong emphasis on that with confidence levels,” Samenow said. “For complex events [like hurricanes], we’ll lay out different scenarios and the likelihoods for each one.”

But like other science news sources that emphasize credibility, Samenow said he and the blog contributors have made mistakes. He recalled a time earlier this year when the blog and other outlets wrongfully forecasted a storm to drop significant snowfall in D.C. overnight, a blunder locals named “snowquester.” Samenow took the event as a learning experience, telling NASA employees who share science information that the recovery from mistakes would set them apart from others. “Since that snow storm, we’ve used different confidence information,” Samenow said. “You’re going to make mistakes, so you have to focus on correcting the record as quickly as possible.”

Similar to how Capital Weather Gang built its readership, Samenow encouraged NASA scientists to share their research by making it more relevant to the public and even getting feedback from readers.

He said NASA was in a unique place to use the success tips from Capital Weather Gang in delivering science news, emphasizing that Goddard already had the necessary evidence and attention-grabbing visuals to share scientific information.

“It’s the observed evidence we can see that make people understand the issue,” Samenow said. “Our challenge is to continue to engage them.”