Refurbishing a shuttle-era cargo container used to transfer cargo to the International Space Station, Lockheed Martin (NYSE: LMT) is prototyping a deep space habitat for NASA at Kennedy Space Center. This prototype will integrate evolving technologies to keep astronauts safe while onboard and operate the spacecraft autonomously when unoccupied.

Under a public-private partnership, NASA recently awarded Lockheed Martin a Phase II contract for the Next Space Technologies for Exploration Partnerships (NextSTEP) habitat study contract. As part of Phase II, the team will continue to refine the design concept developed in Phase I and work with NASA to identify key system requirements for the Deep Space Gateway. Included in this work, the team will build a full-scale habitat prototype in the Space Station Processing Facility at NASA’s Kennedy Space Center and a next-generation deep space avionics integration lab near Johnson Space Center. 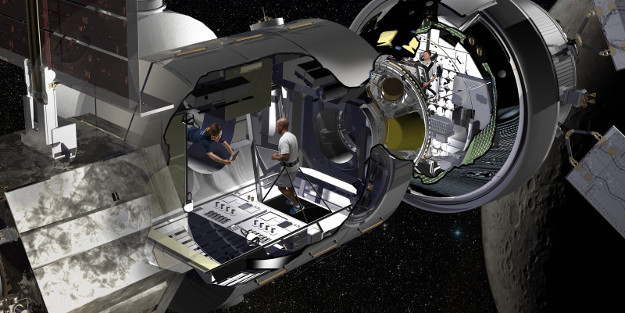 Lockheed Martin artist rendering of the NextSTEP habitat docked with Orion in cislunar orbit as part of a concept for the Deep Space Gateway. Orion will serve as the habitat’s command deck in early missions, providing critical communications, life support and navigation to guide long-duration missions.

“It is easy to take things for granted when you are living at home, but the recently selected astronauts will face unique challenges,” said Bill Pratt, Lockheed Martin NextSTEP program manager. “Something as simple as calling your family is completely different when you are outside of low Earth orbit. While building this habitat, we have to operate in a different mindset that’s more akin to long trips to Mars to ensure we keep them safe, healthy and productive.”

A full-scale prototype of the deep space habitat will be built by refurbishing the Donatello Multi-Purpose Logistics Module (MPLM). Donatello was one of three large modules, flown in the space shuttle payload bay, that were used to transfer cargo to the International Space Station. The team will also rely heavily on mixed reality prototyping using virtual and augmented reality. Through this approach, the team can reduce cost and schedule, as well as identify and solve issues early in the design phase.

“We are excited to work with NASA to repurpose a historic piece of flight hardware, originally designed for low Earth orbit exploration, to play a role in humanity’s push into deep space,” said Pratt. “Making use of existing capabilities will be a guiding philosophy for Lockheed Martin to minimize development time and meet NASA’s affordability goals.”

The work will occur over 18 months and will build upon the concept study performed in Phase I. Phase II will also focus on mixed reality and rapid prototyping, and working on concept refinement and risk reduction. The new results, which will be provided to NASA, will further the understanding of the systems, standards and common interfaces needed to make living in deep space possible.

Additionally, Lockheed Martin will build a Deep Space Avionics Integration Laboratory in Houston to demonstrate command and control between the Deep Space Gateway and Orion. The lab will help reduce risk associated with critical data interfaces between Deep Space Gateway elements and provide an environment for astronauts to train for various mission scenarios.

“Because the Deep Space Gateway would be uninhabited for several months at a time, it has to be rugged, reliable and have the robotic capabilities to operate autonomously. Essentially it is a robotic spacecraft that is well-suited for humans when Orion is present,” said Pratt. “Lockheed Martin’s experience building autonomous planetary spacecraft plays a large role in making that possible.”

Headquartered in Bethesda, Maryland, Lockheed Martin is a global security and aerospace company that employs approximately 97,000 people worldwide and is principally engaged in the research, design, development, manufacture, integration and sustainment of advanced technology systems, products and services.