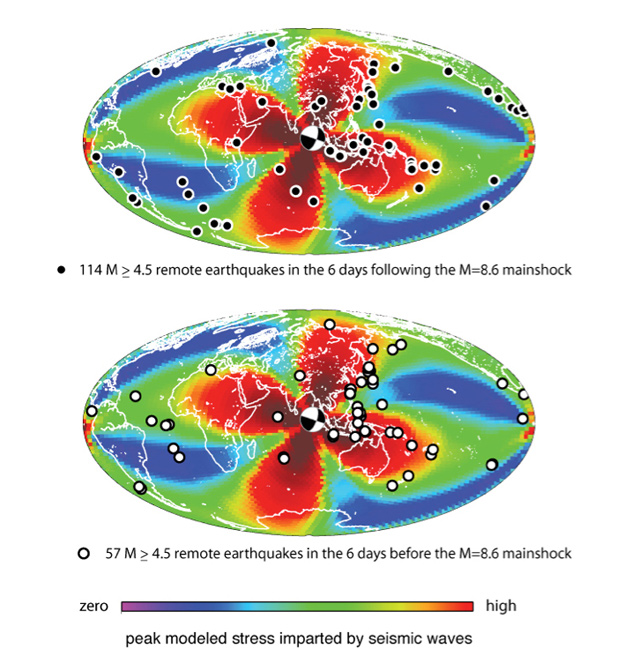 IMAGE: A map of the earthquakes triggered around the globe within a week of the April 2012 earthquake off the coast of Sumatra (white star).

This year’s largest earthquake, a magnitude 8.6 temblor on April 11 centered in the East Indian Ocean off Sumatra, did little damage, but it triggered quakes around the world for at least a week, according to a new analysis by seismologists from the University of California, Berkeley, and the U.S. Geological Survey (USGS).

The April 11 quake was unusually large – the tenth largest in the last 100 years and, similar to a few other recent large quakes, triggered small quakes during the three hours it took for seismic waves to travel through Earth’s crust.

The new study shows, however, that some faults weren’t rattled enough by the seismic waves to fail immediately, but were primed to break up to six days later.

The findings are a warning to those living in seismically active regions worldwide that the risk from a large earthquake could persist — even on the opposite side of the globe — for more than a few hours, the experts said.

“Until now, we seismologists have always said, ‘Don’t worry about distant earthquakes triggering local quakes,'” said Roland Burgmann, professor of earth and planetary science at UC Berkeley and coauthor of the study. “This study now says that, while it is very rare – it may only happen every few decades – it is a real possibility if the right kind of earthquake happens.”

“We found a lot of big events around the world, including a 7.0 quake in Baja California and quakes in Indonesia and Japan, that created significant local shaking,” Burgmann added. “If those quakes had been in an urban area, it could potentially have been disastrous.”

Burgmann and Fred F. Pollitz, Ross S. Stein and Volkan Sevilgen of the USGS will report their results online on Sept. 26 in advance of publication in the journal Nature.

Burgmann, Pollitz, a research seismologist, and their colleagues also analyzed earthquake occurrences after five other recent temblors larger than 8.5 – including the deadly 9.2 Sumatra-Andaman quake in 2004 and the 9.0 Tohoku quake that killed thousands in Japan in 2011 – but saw only a very modest increase in global earthquake activity after these quakes. They said this could be because the East Indian Ocean quake was a “strike-slip” quake that more effectively generates waves, called Love waves, that travel just under the surface and are energetic enough to affect distant fault zones.

Burgmann explained that most large quakes take place at subduction zones, where the ocean bottom sinks below another tectonic plate. This was the origin of the Sumatra-Andaman quake, which produced a record tsunami that took more than 200,000 lives. The 2012 East Indian Ocean quake involved lateral movement – referred to as strike-slip, the same type of movement that occurs along California’s San Andreas Fault – and was the largest strike-slip quake ever recorded.

“This was one of the weirdest earthquakes we have ever seen,” Burgmann said. “It was like the 1906 San Francisco earthquake, a strike-slip event, but it was huge – 15 times more energetic. This earthquake and an 8.3 that followed were in a very diffuse zone in an oceanic plate close to the Sumatra subduction zone, but it wasn’t a single fault that produced the quake, it was a crisscrossing of three or four faults that all ruptured in sequence to make such a big earthquake, and they ruptured deep.”

The seismologists analysis found five times the expected number of quakes during the six days following the April 11 quake and aftershock. An unusually low occurrence of quakes during the 6-12 days before that 8.6 quake may have accentuated the impact, possibly because there were many very-close-to-failure faults sensitive to a triggering shock wave, Pollitz said.

One possible mechanism for the delayed action, Burgmann said, is that the East Indian Ocean quake triggered a cascade of smaller, undetectable quakes on these faults that led to larger ruptures later on.

Alternatively, large quakes could trigger nearly undetectable tremors or microquakes that are a sign of slow slip underground.

“One possibility is that the earthquake immediately triggers slow slip in some places, maybe accompanied by detectable tremor, and then that runs away into a bigger earthquake,” Burgmann speculated. “Some slow slip events take days to a week or more to evolve.” ###

The work was supported by the USGS.