Studies of the unique landscape in the Dry Valleys
of Antarctica provide new insights into the origin of similar
features on Mars and provide one line of evidence that suggests
the Red Planet has recently experienced an ice age, according to
a paper in this week’s issue of the journal Nature.

The distribution of hexagonal mounds and other features on the
Martian surface at mid-latitudes similar to those in the Dry
Valleys also supports previous scientific assertions that a
significant amount of ice lies trapped beneath the Red Planet’s
surface.

David Marchant, a Boston University researcher who has studied
the Dry Valleys for 17 years, co-authored the paper with James W.
Head (lead author), John Mustard and Ralph Milliken, at Brown
University, and Mikhail Kreslavsky of Kharkov National University
in Ukraine.

The National Science Foundation (NSF) supported Marchant’s work
in the Dry Valleys, which helped underlie the assertions in the
Nature paper. NSF is an independent federal agency that supports
fundamental research and education across all fields of science
and engineering. NSF manages the U.S. Antarctic Program, which
supports and coordinates virtually all U.S. scientific research
on the southernmost continent.

Head, Mustard and Milliken were supported by NASA.

The floor of Antarctica’s Beacon Valley, in particular, is
covered with hexagonal mounds that, from the air, resemble the
patterns of cracked mud on a dry lakebed. The Dry Valleys mounds,
however, often measure meters in diameter.

Although these polygon-shaped features occur throughout the
Arctic and Antarctic, an unusual variety found in the western Dry
Valleys region has received particular attention because it forms
only in perennially frozen soils with significant ice content.
These polygons form as sub-freezing temperatures fluctuate,
causing the underlying ice to contract in a hexagonal pattern. As
the ice contracts, fine sediments sift down into the cracks,
leaving a coarse-grained deposit covering the ice.

The research reported in Nature shows that similar mounds and
other formations that appear in the mid-to-high latitudes on Mars
could indicate ice buried near the planet’s surface as well.
Using new information on the global distribution of surface
landforms on Mars, together with data gathered from NASA’s Mars
Global Surveyor and Mars Odyssey missions, Head and other
researchers were able to piece together a history of recent ice
ages on Mars.

“The last ice age on Mars began about 2.1 million years ago and
ended as recently as 400,000 years ago,” according to Head.

Warming of the Martian Poles causes the planet’s ice caps to
partially vaporize and release water vapor into the Martian
atmosphere. Winds transport the water vapor, along with
ubiquitous Martian dust, toward the equator and deposit it in a
meters-thick layer as far as 30 degrees north and south latitude.
There, it drapes over existing terrain, smoothing the Martian
surface. 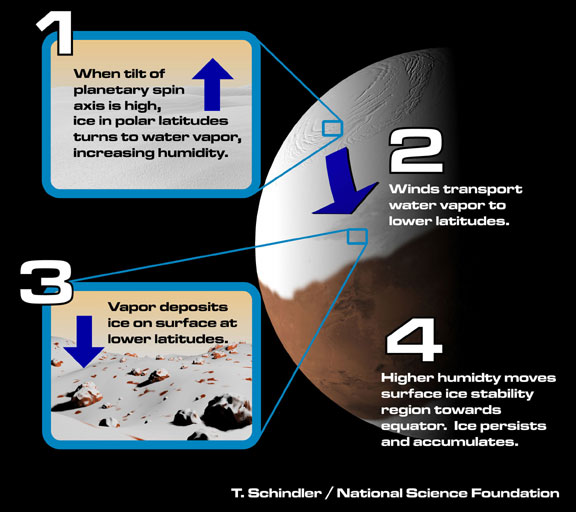 Head and his co-authors report that emplacement of this meters-
thick layer of snow and dust at 30 degree latitudes represents an
“ice age” on Mars. The small number of impact craters seen in
these features, along with the known patterns of changes in Mars’
orbit and tilt, are used to estimate the age of these Martian ice
ages.

The Nature findings complement a paper recently published in the
journal Geology, in which Head and Marchant argue that features
on the surface of the Red Planet are remarkably like glacial
features found only in the Dry Valleys.

The findings not only have implications for the search for
microbial life on Mars, but also may help scientists better
understand the unique Polar desert environment of the Dry
Valleys, and in particular the ancient climate record that may be
stored in the landscape.

“These extreme changes on Mars provide perspective for
interpreting what we see on Earth. Landforms on Mars that appear
to be related to climate changes help us calibrate and understand
similar landforms on Earth. Furthermore, the range of
microenvironments in the Antarctic Dry Valleys helps us read the
Mars record,” said Marchant.

If the analogy between the geologic processes on Mars and those
in the Dry Valleys holds true, then scientists may conclude that
Mars may be more hospitable to microbial life than previously
suspected.

Biologists continue to make discoveries that push back the
boundaries at which conditions are too extreme to support life.
NSF-funded researchers, for example, have offered evidence that
microbes can survive in extremes of cold and darkness between ice
crystals at the South Pole.

Although the Dry Valleys were thought to be a virtual dead zone
when first explored a century ago, new evidence suggests that the
lakes and other landscape features support microscopic life.